Marcedes Lewis picked a good season to post the best numbers of his five-year career. 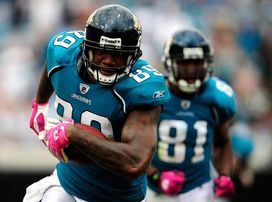 On the heels of a 58-catch, 10-touchdown campaign, the 27-year-old Lewis has reached an agreement with the Jacksonville Jaguars on a new five-year deal, per Vito Stellino of the Florida Times-Union.

The former UCLA Bruin was scheduled to make $7.28 million in 2011 as the Jaguars’ franchise player.

A 2006 first-round draft pick, Lewis ranked second on the team in receptions (58) and first in touchdowns (10) last season.