After a 41-14 dismantling of the Tampa Bay Buccaneers, the Jacksonville Jaguars return to primetime television for the second time in three weeks to take on the Atlanta Falcons. 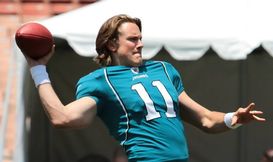 Underdog bettors are hoping Blaine Gabbert can move the sticks Thursday in Atlanta.

This game has had some interesting movement since hitting the board Sunday night. Bookmakers opened the Falcons as 10.5-point favorites, but that line has since been bet all the way up to Atlanta -13.5. That’s a sizeable shift when you take into account the fact that only 56% of the public is coming in on the Falcons.

The Jags are 1-5 on the road this season, scoring an average of just 11.2 points per game. That’s one of the reasons why former head coach Jack Del Rio is no longer with the organization.

Can Blaine Gabbert and Maurice Jones-Drew keep it close at the Georgia Dome Thursday night, or will Matt Ryan and the Falcons move one step closer to a spot in the postseason?

CLICK HERE to check out the Thursday night lines.

Perhaps the best thing the Jaguars have going for them entering this Week 15 matchup is that a bit of history may be on their side. Over the past 23 years, the Falcons have been a double-digit favorite 11 times. In those 11 games, Atlanta is just 3-8 against the spread (h/t to our friend @WagerMinds for the stat). Not only that, but Mike Smith’s crew is 1-4 ATS in their last five contests after scoring more than 30 points the previous week. 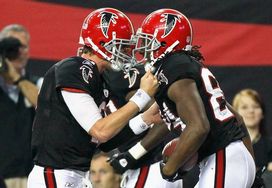 Matt Ryan and Roddy White look to take down the Jaguars on Thursday night.

As to the fact this line has moved close to 3.5 points towards Atlanta (with some sizeable movement taking place Thursday morning/afternoon), I spoke with Caesars Entertainment Senior Race & Sports Analyst Todd Fuhrman Thursday, who told the NFP that while it’s mostly public steam that’s driving the movement, it isn’t that uncharacteristic to see a respectable shift from 11 to 13.5, as those aren’t considered key numbers (key numbers being 3, 7, 10 and 14, for example). Fuhrman went on to explain via twitter that a move from -3.5 to -3 actually carries more significance than a move from -11 to -13.5.

The total may carry some value when you take into account that the UNDER is 19-7 in the 26 combined games these two teams have played this season. Through 14 weeks, the Falcons rank 14th in the NFL in scoring (23.1 pts/gm) while the Jaguars rank 28th (14.8 pts/gm). Jacksonville has only seen two OVERS in their last eight games, while the Falcons had played in eight straight games that went UNDER until last Sunday’s 31-23 win at Carolina.

The bottom line is that this is a big number for the Falcons to cover. Remember, betting double-digit favorites isn’t a profitable long-term strategy. But that doesn’t mean that they never come through.