Jerricho Cotchery could be on the move

After three highly productive years with the Jets from 2006-2008 that included two consecutive seasons with 80+ receptions, wide receiver Jerricho Cotchery has been somewhat of an afterthought in the New York offense over the last two years. 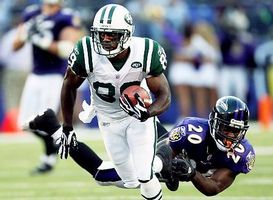 If Cotchery is indeed traded, where will he end up?

Maybe that has something to do with why the Jets are looking to trade the seven-year veteran.

Michael Lombardi of NFL Network is reporting that the Jets are willing to trade the 29-year-old Cotchery in a possible attempt to free up cap space in order to sign other free agents.

After locking up Santonio Holmes to a big contract last week and reaching an agreement with free agent Plaxico Burress on Sunday, Cotchery is more than likely headed for a limited role in New York should he return to the Jets this season.

Should he end up someplace else (like Cleveland, Minnesota or Arizona), Cotchery could be given a chance to be an every-down player.