A team-high nine sacks in his first season with the organization has landed linebacker Kamerion Wimbley a monster new contract. 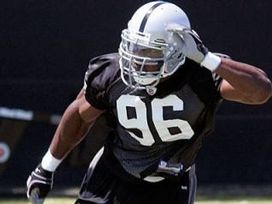 Jason La Canfora of the NFL Network is reporting that the 27-year-old from Florida State and the Oakland Raiders have agreed to a five-year, $48 million deal with $29 million guaranteed.

Wimbley spent the first four seasons of his career in Cleveland before getting traded to the Raiders for a third-round draft pick in 2010.

With Wimbley now locked up, the big question in the Bay Area is whether or not the Raiders will spend the necessary cash to bring back tight end Zach Miller.