With all due respect to LeSean McCoy, the Philadelphia Eagles have finally landed a power back who can pound the rock between the tackles. 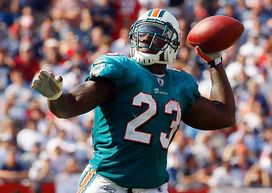 The newest member of the Dream Team: Ronnie Brown.

Jeff Darlington of the Miami Herald is reporting that the Eagles have reached an agreement on a one-year deal with free agent running back Ronnie Brown. Financial details of the contract weren’t immediately made available.

This may not be viewed by the rest of the country as one of the Eagles’ bigger signings this summer, but the fans in Philly are going to love it. At 230 pounds, Brown gives the Birds’ backfield some much-needed power.

For the 29-year-old Brown, it gives him a chance to complement LeSean McCoy on one of the most explosive offenses in the league.