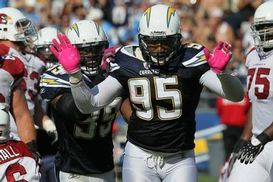 Burnett is cashing in on the best season of his career.

The six-year veteran out of the University of Tennessee has reached an agreement with the Miami Dolphins on a five-year contract that includes $10 million in guaranteed money, per Kevin Acee of the San Diego Union-Tribune.

Burnett—who had started only nine games in five seasons prior to 2010—is coming off an impressive season that included career-highs in starts (16), tackles (95), sacks (6.0) and interceptions (2).

It’s Friday evening on the east coast so there’s a good chance this acquisition flies below the radar.

But that doesn’t change the fact that the Dolphins just signed a pretty damn good football player.