The Washington Redskins have made just three of the 102 picks that have so far been announced at Radio City Music Hall over the last three days.

Two of those have been spent addressing the quarterback position. 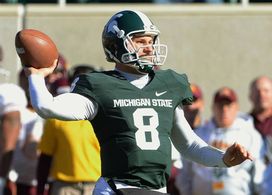 Seemingly too good to pass up early in the fourth round, the ‘Skins selected former Michigan State quarterback Kirk Cousins with the 102nd overall pick.

Cousins—a three-year starter who played in 45 games over four years with the Spartans—completed 64.1% of his collegiate passes and wrapped up his time in East Lansing with a QB rating of 145.1.

The Redskins already have their quarterback of the future in second-overall pick Robert Griffin III, which means Cousins will likely compete to earn the No. 2 spot on the roster.