A report surfaced last week that the National Hockey League is proposing a realignment plan that would see the sport shift from six divisions to four. Before we continue, I want it on the record that I realize how dangerous it is to begin a football column by talking about hockey. 65% of you most likely left the page after reading the words “National Hockey League,” and for that, I apologize. Actually, I don’t apologize. If you’ve already left, you wouldn’t be reading this fake apology anyway.

In between an enthralling Sunday spent doing laundry and shopping for groceries, I began thinking about the possibilities of realignment within the NFL. Not in the sense of whittling the current eight-division format down to six, but in the sense of shifting teams around to see what would happen. The National Football League already has a tremendous product in place, but that didn’t stop me from asking whether there was a way to realign the divisions to make it even better.

Taking geographic proximity, existing rivalries and rivalries that should exist into account, I’ve come up with eight new divisions for your viewing pleasure. 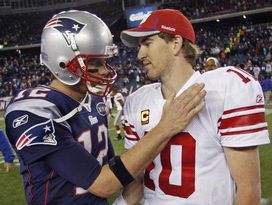 Brady losses two guaranteed wins against the Bills for two games against his kryptonite.

A thin stream of drool began trickling slowly from my lower lip to my black sweatpants preciously three seconds after putting this idea down on paper. The rabid fan bases of Boston, New York and Philadelphia converge in what would quickly become the most hate-filled and upper deck fight-invested division in all of professional sports. Two key rivalries remain intact, while the Brady-Eli Manning feud no longer has to be put on hiatus in-between Super Bowl get-togethers. This division showcases four northeast organizations who play outdoors, Chip Kelly vs. Bill Belichick and New York vs. New York. Hell, this article started as a goof, but now I’m losing sleep over the possibilities.

There’s just no way you can bust up the Green Bay-Chicago rivalry, so we’ll substitute Minnesota and Detroit for a couple of up-and-comers that feature two young quarterbacks who have already combined for three playoff appearances. Had Chicago not collapsed down the stretch last season, this division would feature four playoff teams from the 2012 campaign. Cincinnati says goodbye to the Ravens and Steelers while Indy fans are probably cringing at the thought of replacing Jacksonville with Green Bay. This division offers some of the best tailgating treats of any on the list.

Teams: Jacksonville Jaguars, Miami Dolphins, Tampa Bay Buccaneers, Tennessee Titans
Nickname: Cocktails & Dreams
Longest travel distance prior: Indianapolis to Houston at 1,053 miles
Longest travel distance after: Nashville to Miami at 914 miles
Phrase most often heard at divisional matchups: “We still have a team? I was wondering what everybody was doing here.”

Before you scoff, think of the upside this newly created division could have on the attendance levels for professional football in Florida. By dividing the Sunshine State into three sectors of teams in close proximity, the NFL may finally be able to generate some decent rivalries for Jacksonville, Tampa Bay and Miami. Plus, imagine being a fan of one of these teams. You’d actually go into Week 1 thinking your squad has a shot at making the playoffs. The Jaguars would go from 250,000 to 1 to a respectable 100 to 1 to qualify for the postseason, while Miami loyalists would no longer need to worry about the meatheads from New York and Boston coming down to crap on their parade twice a season. The downside to this division is that the league would immediately need to institute a new rule: No sub-.500 team is permitted to play in the postseason. 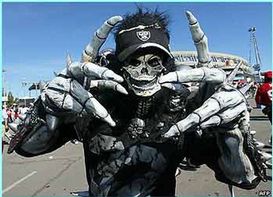 No matter the rivalry, Raiders fans will show up in full battle regalia.

Oakland fans may be pissed to lose the four games a year they currently get against hated rivals Kansas City and Denver, but those people are disgruntled about everything. You could put the beloved U.S. women’s gymnastics team in the Raiders’ division and The Black Hole would still be throwing bottles. The budding feud between Seattle and San Francisco remains in place, while San Diego retains its title as the NFL’s preferred travel destination for fans looking to hit the road once a year. And just think about how much fun it would be to watch the Niners and Raiders butt heads twice a season. The police presence at those showdowns would be so overwhelming that you could probably rob any bank in the Bay Area that day with nothing more than a Super Soaker and a Vespa.

RG3 vs. Newton, The Battle of the Beltway and the continuation of Steelers-Ravens. Successfully navigate this gauntlet of kill shots and you’ll be as prepared for the postseason as any team in the business. The premiere quarterback division in football, watch as all four teams bust through the salary cap every offseason looking to upgrade their respective defenses. Spend a minute pondering the possibilities when this division crosses over with the new-look NFC South.

Buffalo and Cleveland were meant for one another, while Detroit and Minnesota carry their bad blood over to their new digs. Adrian Peterson smiles knowing he could run for 2,500 yards as an amputee and Calvin Johnson prepares to smash all of Jerry Rice’s longstanding receiving records. Browns fans rejoice at the once-ludicrous notion of winning a divisional title, Buffalo fans celebrate the end of Tom Brady’s one-man assault on their franchise. Everybody wins, except for the team that wins this division, as they go on to lose in the wildcard round. 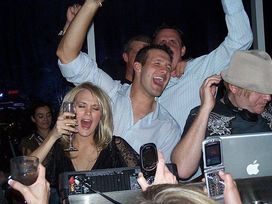 Romo can celebrate knowing he no longer has to deal with the fans from Philly, New York and Washington.

Everybody hates the Cowboys. So football purists can stop complaining about the demise of the current NFC East rivalries because it would take approximately 26 seconds for the fan bases from Atlanta, New Orleans and Houston to pick up where Philly, New York and Washington left off. Four domes, minimal travel and a whole lot of offense. Houston has been in the league since 2002 and still has yet to establish a legitimate rivalry with another NFL franchise. Problem solved. This is the type of division that you could see coming down to the wire each and every season.

Oh-so-close Super Bowl losers Jeff Fisher, John Fox and Andy Reid come together in a division that also includes the impossible-to-realign Arizona Cardinals. Seriously, try this divisional realignment experiment on your own and let me know where Arizona ends up. It’s not easy. The Broncos have a cakewalk to the playoffs as long as Peyton Manning is still around, but how would that be any different from last season? A new rivalry is formed in Missouri and lasts exactly two years until St. Louis relocates to Los Angeles. And just imagine how much Lipitor you would need to consume to combat the effects of a St. Louis-Kansas City tailgate.