LSU opens as the favorite for BCS title game

The rematch is on, but this time, Las Vegas views the showdown between top-ranked LSU and No. 2 Alabama a bit differently. 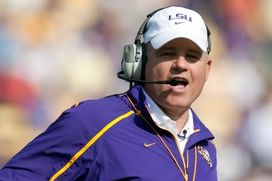 ICONThis time around, Les Miles' Tigers are the favorites.

Just under one month after the Tigers went into Tuscaloosa as a 5.5-point underdog, LSU has opened as a 2.5-point favorite for their BCS title game matchup against Alabama, Wynn & Encore Director of Race & Sports Operations Johnny Avello told the National Football Post Sunday evening.

But as of the current moment, LSU can backers can shop—and find—a better price. The Tigers are currently listed at -1.5 (O/U 40) at the Las Vegas Hilton and -2 (O/U 40) at BetOnline.com.

The SEC Champions went 10-3 against the spread this season, so it wouldn’t come as a shock to see the public jump on the Tigers in the hopes of cashing on more winning ticket. On the flip side, Alabama went 8-4 ATS during the regular season, but failed to cover the number in three of their final four outings.

In one of the best defensive showdowns of the season, Les Miles’ Tigers defeated Nick Saban’s Crimson Tide 9-6 back on November 5.

Will the rematch on January 9 produce a different result?