Making money on the Divisional Round

The NFL Playoffs started with a bang last weekend as three road teams came away with victories, while the lone home winner just so happened to pull off one of the greatest upsets in postseason history.

Will the underdogs find success in the Divisional Round? Will the bye week have an adverse effect on the NFL’s top-seeded teams?

Thankfully, our good friend and veteran Las Vegas handicapper Vegas-Runner from Pregame.com is back to help break down the early line movements for this weekend’s four monster matchups.

CLICK HERE to check out more of Vegas-Runner’s work.

CLICK HERE for a chance to win some cash in this weekend’s NFP/FANDUEL fantasy football salary cap challenge!

Vegas-Runner drops it: “The third meeting of the season between Baltimore and Pittsburgh began with a surprise as oddsmakers posted the line above the key number of “3” when they installed the Steelers as a 3.5-point favorite. This may not seem too significant to most recreational bettors, but it’s huge for the sharps because there is no number more important when it comes to betting NFL games than 3.

ICONThe Steelers have won four of their last five games against the Ravens at Heinz Field.

Strangely enough, no respected Betting Syndicate or wiseguy has stepped up to grab the Ravens at +3.5, telling me that's definitely NOT the side they believe offers any kind of betting value. Otherwise, the sharps would have gone ahead and steamed the Ravens and forced an adjustment down to 3, since it's obvious that most recreational bettors will be backing the Ravens come gameday.

The pressure put on the books by the betting public should force most to drop the price down to Pittsburgh -3, which is where I predict this game will go off. From what I’ve gathered, most wiseguys will be looking to back the Steelers as we approach kickoff. The only reason they haven't yet is because they’re being asked to lay -120 or more to get the Steelers at -3 right now. That should change as books look to limit their liability on the Ravens.

The Total opened anywhere from 36 to 37 and it looks like the sharps believed 37 was the right number because they immediately went OVER 36 where they could find it. With both meetings this season producing only 31 and 23 points respectively, books should end up with balance as recreational bettors back the UNDER.

Let's not forget that "37" is one of those key totals where most sharps want to find themselves on the right side. Unless public pressure forces an adjustment, most wiseguys should sit idle on the total, which is exactly what the books are hoping for. This one should go off where it sits today...at 37.”

Vegas-Runner drops it: “Saturday marks the second meeting of the season between these two teams and once again the Falcons find themselves with home field advantage. The first matchup was played in late November with the Falcons going off as a 2.5-point favorite. If you remember, Atlanta ended up covering the number when they won the game by a field goal. 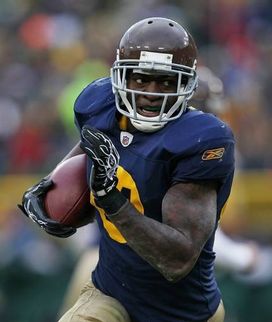 Can James Starks and the Packers keep it going this week in Atlanta?

If recreational bettors money didn’t outweigh wiseguy money in the NFL, it would come as a surprise that the oddsmakers opened this game with Atlanta as a 1-point favorite. But with public perception being factored into the equation along with the Packers being a “public team,” wiseguys were able to take advantage by steaming the Falcons as soon as the game hit the board.

The sharps forced the line to -2 when they bet the Falcons at -1 and -1.5, but they also came back they next day laid -2, which is why the line currently sits where it did when these two teams met back in November, at -2.5. The good news for bookmakers is that the betting public is expected to come in strong on the Packers.

However, with wiseguys laying -1, -1.5 and -2 on the Falcons, the last thing the books want is for recreations bettors to have the opportunity to get the Packers at +3 because it also creates the possibility for the sharps to attempt a middle. By the time this game kicks off, the books will actually be cheering from the wiseguys’ position and rooting for a Falcons cover. And if they can do it by double-digits and kill teasers, the books will end up having a huge day.

Oddsmakers opened the Total (45.5) lower than where it went off for these two teams back in November (47.5), but that wasn’t low enough to keep the Betting Syndicates and other wiseguys away as they raced to the floor to get down on the UNDER and continued steaming it all the way down to 43.5.

Just like with point spreads, there are also "key totals,” with 44 & 45 being two of them. Even though they aren't as key as 37 or 41, sharps are definitely conscious of the fact that this total has now gone through two key numbers, meaning you shouldn’t expect this total to go through a third and down to 43.

Once again, the public bettors should limit the books exposure as they are expected to back the OVER very strongly in this game, ultimately providing some balance for bookmakers on the Total. Look for this to go back up a bit as we approach gameday, then settle around 44.”

Vegas-Runner drops it: “Here’s another playoff matchup where the participants have already met earlier in the season. However, even after beating the Bears outright in Chicago as a 6-point road dog back in October, oddsmakers sent the line out for this game with the Bears as even bigger favorites than before.

In fact, after opening this game with the Bears anywhere from a 9 to 9.5-point favorite, the books were forced to adjust and increase it even more as wiseguys stepped up and laid the points with Chicago. 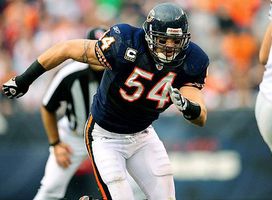 Urlacher and the Bears pose a big problem for Seattle on Sunday.

However, once again it appears that the recreational bettors will be on the other side of the wiseguys as books are expecting a lot of Seahawks money to come in late when the public finally speaks. Because after dismantling the defending Super Bowl Champs last weekend and having already beaten this same Bears team earlier in the year, public bettors will definitely want to grab the double digit spread with Seattle. From speaking with a handful of bookmakers already, I can tell you that most agree this will be the case come Sunday.

The game now sits at Chicago -10 and the books will ultimately be pretty balanced by the time this game goes off. This is exactly where I expect this line to stay.

The Total for this matchup went up a couple of points higher than it did for the first meeting when the game went off at 37.5 and saw a combined 43 points scored.

Books opened the Total as low as 39 and as high as 40 before getting steam from the wiseguys on the OVER, which is why we are seeing it at 41 across the board today.

41 is one of the most important totals in the NFL, so most books will be very reluctant to move off it. But from what I've gathered, they may not have much of a choice because not only did the wiseguys steam the OVER, but the betting public is expected to bet the OVER as well.

That will ultimately make this a very one-sided game for the books, which is never a good thing. So they will definitely be hoping for a very low scoring outcome.”

Vegas-Runner drops it: “A month ago, the Patriots were installed as a 4-point home favorite over this same Jets team before going on to blow them out, 45-3. Earlier in the season, the Patriots went into New York as a 3-point road favorite and lost 28-14.

For Sunday's playoff game, oddsmakers sent out the Patriots as a 9-point home favorite and it appears there is a difference of opinion amongst wiseguys, because we've since seen this price go UP and DOWN at different shops.

The home team has covered the spread in each of the last four meetings between the Patriots and Jets.

With the betting public also expected to be split on their decision as to who they’re going to back come Sunday, I expect to see a much more uniform price across the board on gameday. The only question is whether that line will be shaped more by wiseguy money or by recreational bettors money, once they start to speak on Sunday.

I believe it will be a little of both with the wiseguys grabbing +9.5 where available and the public laying -8 and -8.5 where they can find it...ultimately leading to a closing line of -9, which is exactly where it opened.

This tells me the oddsmakers did a good job with this price and the books will be grateful not to have too much exposure because they’ll be able to sweep up all that vig.

For the rubber match, oddsmakers sent it out at 45 and even though the public bettors are expected to back the OVER, the books were forced to drop it to 44.5 and then down to 44 in response to some sharp money being wagered on the UNDER.

Again, we are hovering around some key totals, so the books will be very careful from here on out. And with the recreational bettors expected to bail out the books by providing balance when they come in with OVER money on gameday, I expect we won't see this one drop any lower than where it sits today. We should see this Total go off where it did the last time these two met...at 44.5.”