Former Chicago Bears offensive coordinator Mike Tice seems to be enjoying his first year away from the National Football League since 1994. 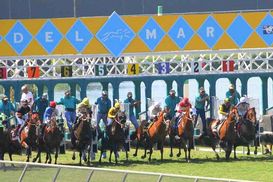 On Thursday, Tice hit the Pick 6 at Del Mar Surfside Race Place in Southern California and cashed in for $100,796.20, according to Vince Bruun, the Director of Media Relations at Emerald Downs in Auburn, Washington (h/t Brad Biggs of the Chicago Tribune). Tice's winning ticket cost a total of $128.

Per Bruun, Tice was the only bettor to hit the Pick 6 at Del Mar on Thursday. In addition, the front page of the Del Mar website confirms that the Pick 6 paid off on Thursday for just over $100,000.

The Pick 6 is a wagering option offered at racetracks in which bettors must select the winning horse in six consecutive races. Thursday’s Pick 6 at Del Mar began with the third race and ended with the eighth.

Below are Tice’s winners. Take note of the winning horse in Race 4.