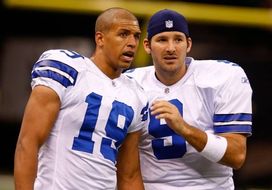 Miles Austin (left) is out while Tony Romo is battling a rib injury.

“Books were hesitant to send out a line until as late as possible and when offshore finally put up a number Sunday, they opened Dallas at -4.5 with a total of 46. Money came in immediately on the ‘Skins and UNDER and it's since settled at Dallas -3.5 (+105) or -3 (-125).

This is one prime-time game where the public isn't expected to come in heavy on the OVER. In fact, books should see balanced money from the public on the total. As far as the side, the betting public surprisingly WON'T be on the VERY public Cowboys team due to injuries and instead will be backing the 2-0 ‘Skins. Books will be HEAVY on Washington teasers with bettors taking them up to +9 or more, meaning the books will be rooting for a double-digit Dallas win.

Don't be surprised to see betting syndicates steam the Cowboys if public money forces books to make the line -3 (-110) or better, especially from those who got down on Washington at +4.5.”

“The line opened at Dallas -6/45 and has come all the way down to -3.5 (even money), while the total has held strong at 45. We think that many wiseguys out there believe that Romo wont last the entire game and are taking the points as a result.

In addition, we’re getting very even action on the game, as 52% of the money bet on the spread is backing the Cowboys, while 55% of the money is on the OVER 45.”

“The game was down for most of the week due to the uncertainty surrounding not only [Tony] Romo, but also [Dez] Bryant and [Felix] Jones.

The game was put on the board Sunday industry-wide. The opening line was in the range of anywhere from the Cowboys -4.5 to -5.5, however that line has been dropping steadily across the board and is a pretty consistent Cowboys - 3.5.

A Redskins win and they will be in sole position of the NFC East. Prior to the start of the season, the Eagles were getting most of the ink from the media and bettors. With a ‘Skins win that may start to change dramatically.”

CLICK HERE to make your picks for the Monday night game!