Newton cracks 4.6, Locker burns it up

INDIANAPOLIS—You’ve got to hand it to Cam Newton. The guy knows how to grab a headline. 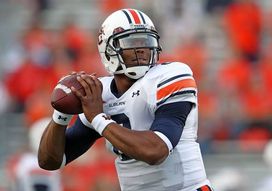 The former Auburn signal-caller continued to make his case as the top quarterback in the 2011 draft class Sunday morning when he posted unofficial 40-yard dash times of 4.58 and 4.59, per the NFL Network.

As we discussed on Friday, Newton’s 40 time was the subject of much debate in Las Vegas, as sportsbooks around the country set the over/under at 4.6 seconds. However, keep in mind that the OFFICIAL times are what matter, not the UNOFFICIAL times that are flashing up on your television set.

Newton’s performance is sure to keep his ever-growing draft stock in check, but former Washington quarterback Jake Locker may have helped his cause a bit by turning in an unofficial and very impressive 4.52 Sunday morning at Lucas Oil Stadium.

Locker has a chance to crack the first 32 picks in April’s draft, but several scouts and draft experts believe he’s more likely to hear his name called during the second round.