Happy New Year, everybody! What better way to kick-off 2012 than by taking advantage of some favorable lines on the Week 17 schedule?

With that in mind, we’re going to turn things over to our good friend Warren Sharp of the website Sharp Football Analysis.com, who is giving us his read on two games set to get underway in the next few hours.

Warren Sharp says: “The Falcons are looking to get right after that brutal performance against the Saints last Monday, so they will be playing their starters and going for the win. The question is, how long will their starters play?” 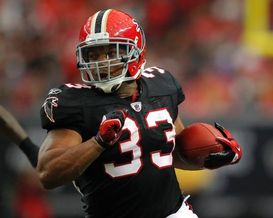 ICONShould we expect a heavy dose of Michael Turner and the running game on Sunday?

“Atlanta has to play in the wildcard round and could end up with a game next Saturday. It won't take too much of an effort to jump out to a lead on the Bucs, who have trailed 28-14, 28-0 and 20-10 at the half over their last 3 outings, against teams with defenses far less efficient than the Falcons.”

“Since Mike Smith came to town, off of a game against the Saints, the Falcons’ UNDERS are 6-1, going under by 8 points per game. Sunday’s total is the largest one set in Tampa-Atlanta series history, but I don't see the incentive for the Falcons running up the score, as that's how their games have been going over.”

“Since Week 12, the Bucs have been scoring only 16 points per game. When their opponent has scored 37 or fewer points, the game has gone UNDER. But when their opponent has put up 38 or more (Carolina twice and Jacksonville), their games have gone OVER. I see Atlanta committing to the running game after building a lead and trying to ensure their players leave healthy. I advised my clients to take the UNDER when it was at 47. At the current number of 46, I still like the UNDER.”

Warren Sharp says: “I like this game OVER with or without Vikings quarterback Christian Ponder. Even if the rookie misses the game (which he's slated to start) or plays and gets pulled, backup Joe Webb provides a big mobility improvement and in his three games receiving serious playing time or starting, OVERS are 3-0.” 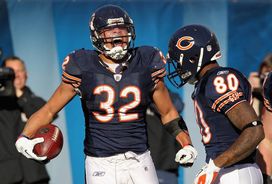 The Bears have seen a nice uptick in offensive production with Kahlil Bell at running back.

“In addition, running back Kahlil Bell has been a big improvement for the Bears, as he brings more explosion to the lineup than the aging Marion Barber. And let’s not forget the improvement the offense made in Week 16 with Josh McCown at quarterback over the ineffective Caleb Hanie.”

“The Vikings have the 32nd-ranked pass defense in terms of efficiency, the 29th-ranked overall defense and have allowed 34 points per game over their last four outings. Minnesota has gone OVER in four straight by huge margins (OVER by 29, 15.5, 8.5 and 15) and has gone OVER in six of their last seven contests. At home in 2011, the Vikings have had only one UNDER (six OVERS) and that game went under by just a half point (still saw 44 total points).”

“Chicago has gone OVER in six of their last eight games, with those two UNDERS coming against two teams that consistently go UNDER (Denver and Kansas City).”

“I advised clients to take the OVER when it was 40 but feel comfortable recommending any number from 40 to 41.”