Our good friend Warren Sharp from the terrific website Sharp Football Analysis.com is back to help us pinpoint some of the best NFL totals for Week 10. Warren went 2-1 in his picks for the National Football Post last week, which puts his record for the season at 7-4.

CLICK HERE to check out all of the Week 10 sides and totals.

Warren Sharp says: “This play is solid on a number of fronts. The Colts offense has scored an average of only eight points per game over their last three outings, despite playing fairly average defenses in the Saints, Titans and Falcons. They now go up against the sixth-most efficient defense in the league in Jacksonville, who has allowed just 16 points per game in their last three contests, against solid offenses in Pittsburgh, Baltimore and Houston. 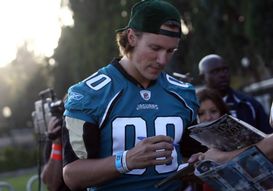 On the other side of the ball, we know how bad the Colts defense has been this season, but these Jaguars are not the Falcons or the Titans, both of whom played to UNDERS the past two weeks with Indy. The Jags are the least efficient offense in the NFL, vastly behind even the Colts’ depleted offense. Jacksonville averages just 12 points per game and has scored over 16 points only one time in 2011.

Add on the fact that the Jaguars are off their bye and bye week teams—particularly bad teams—have seen a ton of UNDERS cash this season. In fact, teams at or below .500 off their bye have seen UNDERS go 8-1 this year by a solid 12 points per game.”

Warren Sharp says: “On the line, 51 is an important number that was missed if you were not a client on board this past Tuesday when I released some of my Week 10 plays, but I would still take 50.

The Falcons have seen four straight games go under and are two weeks removed from a bye week game that showed their defense is strong and healthy. Atlanta is at home where they have seen eight of ten games totaled above 45 go UNDER since Matt Ryan and Mike Smith came to town. The Falcons are coming off a game against the Colts and teams who just played Indianapolis with a total set above 41 have gone UNDER 5-1 this season.

Looking at the Saints, a clear pattern is evident. When New Orleans plays teams with a bad defense (Green Bay, Carolina, Indianapolis and St. Louis), the OVERS are 4-0. But against respectable defenses, (Chicago, Jacksonville, Tampa Bay and Houston) UNDERS are 4-1. Atlanta has a solid defense overall, as this team currently ranks as the fifth most efficient defense in the NFL. After allowing 25+ points per game in four of their first five outings, the Falcons held very explosive offenses such as Carolina and Detroit to 17 or fewer points. They are allowing just 13 points per game over their last three contests.”

Warren Sharp says: “A potentially messy game could unfold in the Pacific Northwest on Sunday as Baltimore and Seattle are looking at a 50% chance of rain. But rain does not make a game go under. And these two teams set up nicely for one another. 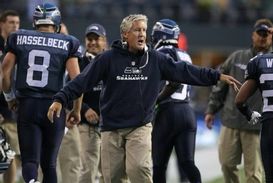 Against non-divisional opponents, Pete Carroll's Seahawks love to go OVER.

Over the last two seasons, after playing the Steelers, the Ravens’ OVERS are 3-0. Baltimore spends so much effort on defense in that war that it's only natural for a slight letdown the following week—especially when you have to travel across t he country. This is the Ravens’ third matchup against the NFC West this season. They beat the Rams 37-7 in a game that eclipsed the total and they beat the Cardinals 30-27 in another game that gave the OVER backers a nice payday.

The Seahawks’ defense did not disappoint last week and earned me and my clients a win on the UNDER, but this week at home I look for the total to go OVER.”

Warren Sharp says: “Since 2008, the Buccaneers have seen just seven home games totaled at 44 or higher. In those seven games, the UNDER is 7-0, going UNDER by eight points per game. In addition, Tampa Bay is off of a date with the Saints and they typically trend heavily toward the UNDER in these weeks: UNDERS are 10-2 after facing the Saints since 2005 and are 4-0 the last four games. Overall, all three of the Buccaneers’ most recent games have cashed for UNDER bettors.

The Texans have been a strong UNDER team on the season so far, as Houston has seen twice as many UNDERS as OVERS in 2011.”