No surprise here: Alabama opens as favorite for 2014 BCS Championship

The final pieces of confetti hadn’t even come to rest on the grass at Sun Life Stadium in Miami on Monday night before Alabama head coach Nick Saban began talking about next season. Despite thrashing the top-ranked Notre Dame Fighting Irish 42-14 in the BCS Championship game for his third championship in four years, Saban told reporters that his staff would only enjoy the win for “24 hours or so” before it was time to get back to work.

The same holds true for the staff at the LVH sports book in Las Vegas. 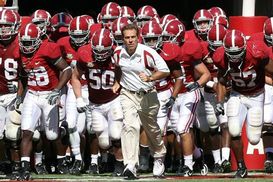 Can anybody stop Nick Saban and the Crimson Tide?

Less than 24 hours after the Crimson Tide put the finishing touches on yet another remarkable season, the oddsmakers at LVH posted Alabama as the 5/2 favorite to claim next year’s BCS Championship. It’s no surprise considering star quarterback A.J. McCarron will be back under center for the Tide next season, along with the aforementioned fact that Alabama has claimed three titles over the last four years.

With head coach Chip Kelly, quarterback Marcus Mariota and dangerous, multi-purpose weapon De’Anthony Thomas coming back to Eugene in 2013, the Oregon Ducks find themselves right behind the Crimson Tide at 5/1, while Urban Meyer’s undefeated Ohio State Buckeyes represent the Big Ten in third at 6/1.

We could try to make the case that there’s value to be had in a team like Oklahoma (40/1) or UCLA (60/1), but when you take into account the fact that an SEC school has claimed each of the last seven championships, you’re probably better served putting that money aside for something that will produce a return on its investment. At the current moment, six of the top ten teams on the odds board (Alabama, Georgia, Texas A&M, South Carolina, LSU and Florida) call the SEC home.

And how about those USC Trojans? Entering last season as the Associated Press’ No. 1 team in the country, Lane Kiffin’s disastrous 7-6 campaign has the Men of Troy listed at 60/1 in early January.

Even in that spot, we think the LVH is being generous to the Trojans.