Rookie quarterbacks Robert Griffin III, Andrew Luck and Russell Wilson may have taken the NFL by storm in 2012, but it’s the familiar faces of Peyton Manning and Tom Brady who currently sit atop the Super Bowl odds board at LVH. 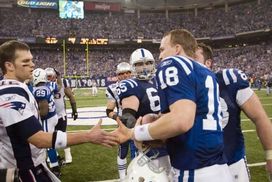 Manning Brady ICONBrady and Manning for the right to play in the Super Bowl? We doubt that would come as a big surprise.

Manning’s Broncos are 7-3 against the number during the current ten-game winning streak, while Brady’s Patriots have won eight of their last nine contests and look to secure a first-round bye with a win over division-rival Miami on Sunday.

In the NFC, preseason favorites Green Bay (6-1), Atlanta (6-1) and San Francisco (7-1) all sit within the top-six at the moment, but the big story comes to us out of Seattle, where the white-hot Seahawks—winners of six of their last seven—are currently posted at 8-1. Check out this chart from our friends at Beyond the Bets.com to track how the Seahawks have flown up the board over the last month and take note that it was just four weeks ago that Pete Carroll and company could have been purchased at 50-1.

Seattle needs the unlikely to happen this Sunday (Arizona upsetting San Francisco) if they want to host at least one playoff game at CenturyLink Field, where the team is 7-0 both straight-up and against the spread this season.

And for those of you who may be interested, LVH currently has the AFC listed as 2.5-point favorites over the NFC for the Super Bowl. 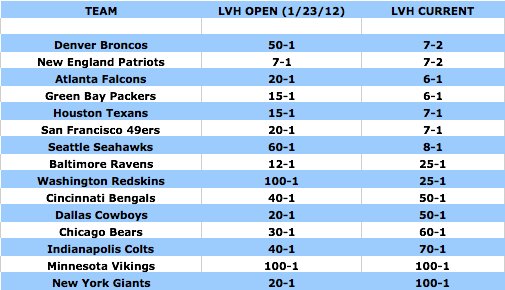