One of the nation's top running backs is turning pro

If the Connecticut Huskies plan on winning the Big East again next season, they’ll have to do so without their best player.

Junior running back Jordan Todman—who was unanimously selected as the 2010 Big East offensive player of the year—said after Saturday night’s Fiesta Bowl that he plans to forgo his senior season and declare for the NFL draft. 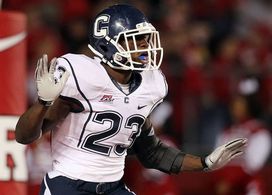 Todman led the Big East in rushing this past season with 1,695 yards.

The 5-9, 190-pound Todman rushed for a Big East-best 1,695 yards and 14 touchdowns in 12 games this season for the Huskies. A true workhorse running back, Todman finished the year ranked second in the country in rushing attempts (334), trailing only Western Kentucky’s Bobby Rainey (340).

Connecticut head coach Randy Edsall told reporters after the game that he is “100 percent behind” Todman’s decision to leave school early, per ESPN.com.

Todman wrapped up a 2010 campaign in Glendale, Arizona Saturday night that included ten games with 100+ rushing yards and eight outings with 25 or more carries. The junior from North Dartmouth, Massachusetts finished his collegiate career with 121 yards on 32 carries (3.8 YPC) in Saturday’s 48-20 Fiesta Bowl loss to the Oklahoma Sooners.

Todman’s on-field production speaks volumes, but he’ll have to flash some speed over the next few months if he wants to establish himself as one of this year's top running back prospects. In 2009, all seven running backs that were selected within the first two rounds ran a 4.56 or faster 40-yard dash at February’s combine in Indianapolis, with two of those players (C.J. Spiller, Jahvid Best) running 4.35 or faster.