The saga finally reached its conclusion, completing the collapse of one NFL franchise while simultaneously signifying the ascension of another.

The New York Jets traded Pro Bowl cornerback Darrelle Revis to the Tampa Bay Buccaneers on Sunday in exchange for Tampa Bay’s 2013 first-round draft pick (No. 13) and a conditional third or fourth-round selection in 2014. As a part of the trade, the Buccaneers signed Revis to a six-year, $96 million pay-as-you-go contract that will see the cornerback make $16 million per season, with no guaranteed money, per Adam Schefter of ESPN.

The Revis trade marks the latest transaction in a two-year spending spree by the Buccaneers that has demonstrated the franchise’s willingness to do anything and everything in its power to get back to the playoffs for the first time since 2007. The $96 million financial windfall for the 27-year-old cornerback comes just weeks after Tampa Bay dished out a five-year, $41.25 million payday to former San Francisco 49ers safety Dashon Goldson.

In Tampa Bay, Revis and Goldson will create a talent-rich secondary that already includes 2012 first-round draft pick Mark Barron and six-year veteran Eric Wright. Having ranked dead last in the NFL in pass defense in 2012, the Buccaneers entered the offseason committed to improving the weakest part of the team’s roster. With Revis and Goldson now in the fold, the Buccaneers possess an arsenal capable of contending with NFC South heavyweights Atlanta and New Orleans. 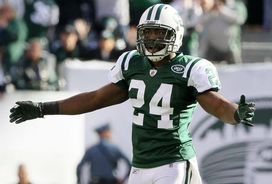 In Tampa Bay, Revis will help to revamp the league's worst passing defense.

The blockbuster trade also reinforces the yin and yang nature of life in the NFL. For one team to rise, another must fall. The Buccaneers will enter the 2013 campaign with hope and excitement amid higher expectations and a loftier mission.

The New York Jets will enter the 2013 season simply looking to survive.

Riding the ferocity of one of the league’s most punishing defenses, the Jets were coming off their second consecutive trip to the AFC Championship game just two years ago. The team had a budding young quarterback in Mark Sanchez and looked poised to become one of the AFC’s elite franchises.

But life doesn’t always go according to plan. The Jets have lost 18 regular season matchups since that second trip to the conference title game, said goodbye to general manager Mike Tannenbaum and have watched player after player depart for greener pastures. While Tampa Bay spent Sunday making yet another upgrade to the roster, the Jets spent the day parting ways with their best player.

Don’t blame new Jets general manager John Idzik. Much like Oakland Raiders general manager Reggie McKenzie, Idzik inherited a messy situation that will take time to clean up. Revis wasn’t coming back to New York. Everybody knew it. Idzik did the best he could to ensure his team would get something useful out of the deal. Shipping Revis to Tampa now gives New York two selections within the first 13 picks of the NFL draft.

The Jets are in rebuilding mode. And there’s no better way to rebuild a franchise than through the NFL draft.

Tampa Bay, however, is past the rebuilding phase. Spending that much money over the last two years comes with a caveat: Win. Anything else will be deemed unacceptable.

On Sunday, Darrelle Revis left one NFL city for another. His departure concluded the New York Jets’ precipitous fall from the top of the mountain to the barren floor of the valley below. His arrival in Tampa Bay signifies the Buccaneers’ attempt to rise from the basement of the division to top of the conference.

The yin and the yang of life in the NFL.