Through the first three games of the 2012 NFL campaign, the New Orleans Saints offense was piling up the rocket-powered statistics that we’ve grown accustomed to witnessing ever since the organization acquired quarterback Drew Brees during the 2006 offseason. Just 12 quarters into the year and the Saints were already averaging 377.3 total yards and 27.6 points per game, numbers that, if maintained throughout the course of the entire 16-game regular season, would have ranked New Orleans sixth and fourth in the league, respectively.

Three games into the 2012 season and the Saints were 0-3 in the standings, having suffered defeat at the hands of Washington, Carolina and Kansas City. The Redskins would go on to win the NFC East, but the Panthers (7-9) and Chiefs (2-14) would enter the month of April in possession of selections within the first 14 picks of the 2013 NFL draft.

The New Orleans offense, while appearing out of sync at times, wasn’t the primary culprit for the team’s sudden downfall. Yes, the franchise that had hoisted the Vince Lombardi Trophy just 31 months prior was dealing with a swarm of issues on all fronts, but it was the organization’s defense that had hit rock bottom faster than a cement-booted corpse that had double-crossed The Family.

Through the first three contests of the 2012 campaign, the Saints defense was surrendering an average of 477.3 yards and 34.0 points per game en route to the worst season-long statistical performance in NFL history. Defensive coordinator Steve Spagnuolo lasted exactly one season before he was shown the door while the Saints finished the year with the team’s first losing record (7-9) since 2007.

Flash forward exactly one year and you’ll find a New Orleans defense in the midst of one of the most impressive 180 degree turns in recent memory. 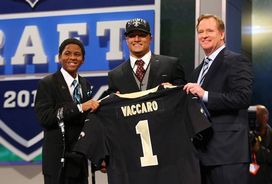 Under the guidance of new defensive coordinator Rob Ryan—who took the fall in Dallas last offseason for yet another underwhelming finish from the Cowboys—the Saints defense has undergone a remarkable turnaround in just one year’s time. Through the first three games of the season, New Orleans is undefeated and boasts a defensive unit that ranks fifth in the league in total defense (295.7 yds/gm), fifth in scoring (12.7 pts/gm), ninth in turnovers (6), 12th in third down conversions (35.1%) and 14th in sacks (8).

At the conclusion of the 2012 campaign, the New Orleans defense ranked 18th or worse in four of those five statistical categories, finishing 31st in scoring and 32nd in total defense.

“I don’t know anything about last year,” said Ryan. “I know we have a lot to prove, and I think our guys come with the mindset that we want to get better each week. If we can be a little tiny part of our success here, that’s what we want to do and that’s what we strive for.”

The sign that a new defensive era had commenced in the Big Easy came with 1:09 remaining in the fourth quarter of the Saints’ 23-17 Week 1 win over preseason Super Bowl contender and division rival Atlanta. Facing a first-and-goal at the New Orleans 7-yard line, quarterback Matt Ryan and the Falcons offense were shut down on four consecutive pass plays, culminating with safety Roman Harper’s fourth-down interception that sealed the victory.

In the eight quarters since that goal line stop, the Saints have surrendered just 21 points, seven of which came by way of a Week 2 85-yard pick-six by Buccaneers linebacker Mason Foster. And after giving up an 11-play, 80-yard touchdown drive to Carson Palmer and the Arizona Cardinals on Sunday, the New Orleans defense bolted down the hatches and pitched a shutout effort the rest of the way en route to a 31-7 cruise control victory.

"It's like night and day from last year," Saints linebacker Curtis Lofton said after Sunday’s win. "Last year ... I didn't know what that was. This year is what I expected."

More impressively than the what, when it comes to the New Orleans defense in 2013, is the how. Prior to Week 1, the Saints lost key defensive contributors in linebackers Jonathan Vilma (knee), Victor Butler (knee) and Will Smith (knee) as well as defensive end Kenyon Coleman (pectoral tear). The news wasn’t any better following the team’s 16-14 comeback win in Tampa Bay, where CB Patrick Robinson was lost for the year with a knee injury.

“This time of year, everybody get nicked and bumped and everything,” said Ryan. “I haven’t really noticed, and I know we have good players out and everything. We have a whole roster, and whoever is in, it’s the next man up. It’s always been that way in the NFL and we just go on with what we have. We game plan the best we can (and) our coaches are working tirelessly to make sure we that have a good plan, a solid plan. The guys we have here are conscientious and they have to go out and execute. They’ve done an excellent job.”

One of those players, four-year veteran linebacker Junior Galette, who notched a sack and three quarterback hurries against Arizona, expressed a humble sentiment Sunday afternoon echoed by many in the New Orleans locker room despite the team’s lightning-quick 3-0 start.

"I going to have to say I'm, and we're, taking it one game at a time," Galette said.