If the Lions plan on snapping their seven-game Thanksgiving Day losing streak, they’ll have to avoid getting off to a slow start. Detroit has been outscored 145-110 in the first half this season (-35, 24th in NFL) while the Packers have blasted opponents 189-118 during the first two quarters of action (+71, 2nd in NFL). Just for reference, the first-half line for this game is currently Green Bay -3.5. 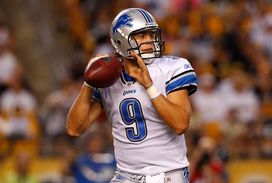 Can Matthew Stafford and the Lions knock the Packers from their undefeated perch?

This game opened at Green Bay -6.5 but despite 64% of the bets coming in on the Packers, the line has dropped to GB -6. That means some of the big money is getting down on Jim Schwartz and the Lions. Remember, Aaron Rodgers and company are just 2-2 against the spread over their last four games and 3-2 ATS on the road this season.

While Las Vegas shops are sure to see some respectable volume on the Lions, the same cannot be said about the UNDER, as 80% of the public is currently betting this game to go OVER the total (55.5). And why not? The OVER is 14-6 in the 20 combined games these two teams have played in 2011, as Green Bay (35.5 pts/gm, 1st) and Detroit (30.1 pts/gm, 3rd) feature two of the highest scoring teams in the NFL this season.

Be advised that the Lions are 0-7 ATS in their last seven Thursday games and 6-19-1 ATS in their last 26 games played in the month of November. If they want to cover and possibly beat the undefeated Packers, Detroit is going to need a superb effort on both sides of the football.