Panthers quarterbacks Cam Newton, Jimmy Clausen and Tony Pike have a combined ten starts between them, so it makes sense that the Carolina front office would be interested in acquiring a veteran signal-caller. 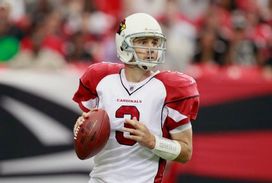 Anderson brings experience to the quarterback position in Carolina.

With that in mind, the Associated Press is reporting that the Panthers are closing in on a deal to sign free agent quarterback Derek Anderson. The 28-year-old was released by the Arizona Cardinals last week.

It’s still too early to tell if the Panthers plan on starting Newton right from the start, but the acquisition gives Carolina a veteran quarterback with 43 starts under his belt, should the coaching staff decide to bring the Heisman Trophy winner along a bit slower.

Anderson started nine games for the Cardinals in 2010, throwing only seven touchdown passes to ten interceptions.