Patriots open in Vegas as the Super Bowl favorite

The action on the field won’t resume for 14 days, but don’t tell that to the city of Las Vegas.

Following the Giants’ 20-17 overtime win over the San Francisco 49ers on Sunday night, sportsbooks around the globe posted their opening point spreads for Super Bowl XLVI. As many anticipated, the Patriots opened anywhere from -3 to -3.5 for their rematch with the G-Men, with the total opening at 54. 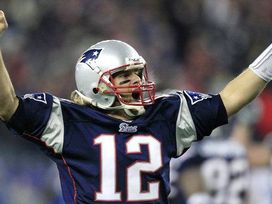 Brady and the Pats get their shot at redemption in two weeks.

While the side has held steady, the total has already moved as high 55.5 at the MGM in Las Vegas.

Prior to the Giants’ overtime thriller, Tom Brady and the Patriots punched their ticket to Indianapolis with a 23-20 win over the Baltimore Ravens. The victory gave the 34-year-old quarterback from Michigan his 16th career playoff win, tying him with Hall of Famer Joe Montana for the most postseason victories by a quarterback in NFL history.

The win over Baltimore also gives Brady and the Pats a chance at redemption over a Giants team that beat them 17-14 in the 2008 Super Bowl, bringing to an end New England’s hopes of becoming the first team since the 1972 Miami Dolphins to put together a perfect season.

This game is going to see an abundance of analysis over the next two weeks, so for now, get some sleep and feel free to let us know who you like in the comments section below.