Spend five minutes bouncing around the internet and you’ll quickly notice that a Cam Newton-Carolina Panthers marriage is a very popular prediction. Hell, even the latest installment of the NFP Mock has the former Heisman Trophy winner as the first pick in this month’s draft. 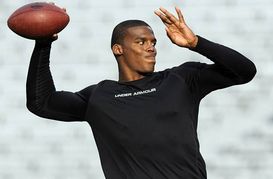 But just because something’s popular doesn’t mean everybody is on board. When it comes to the great draft debate of 2011, former New York Giants quarterback Phil Simms is in the minority.

Per a recent post by Cris Collinsworth of FootballPros.com, Simms believes that no quarterback will be selected within the first five picks of the 2011 NFL draft. Should Simms’ prediction come true, that would mean four teams (Carolina, Buffalo, Cincinnati, Arizona) in need of quarterback help would be passing on Newton and Missouri’s Blaine Gabbert the first time around.

It also means teams like Tennessee and Washington could be in for a big surprise come April 28.