Philadelphia: Home of the Big Splash

We’re surprised, but we shouldn’t be. Recent history has demonstrated preciously that. When the Philadelphia Eagles are rumored to be zigging, they zag. When the franchise is reported to have no interest in signing a particular player, they break the bank for his services.

We saw it with the Michael Vick signing in 2009. Donovan McNabb had just led Philadelphia to the organization’s fifth NFC Championship game in eight years. Nobody thought the team was interested in a change at the quarterback position.

We saw it again in 2011 with the acquisition of Nnamdi Asomugha. The Texans were the team that was supposed to sign the Pro Bowl cornerback. Then it was the Cowboys, then the Jets. But when the dust had finally settled on that Friday afternoon in August, it was Philadelphia who sent shockwaves through the internet by getting that highly-coveted signature on the dotted line. Five years, $60 million. The Eagles were never connected to Asomugha until the moment they signed him.

Again, everybody was wrong.

Now it’s 2013 and Andy Reid is no longer the head coach in Philadelphia. The Eagles are rumored to be in the market for Oregon head coach Chip Kelly and make it as far as the interview process. Kelly apparently balks at a future in the NFL and heads back to Oregon. The Eagles go on to interview everybody from Brian Billick to Brian Kelly. Then, it all goes quiet. 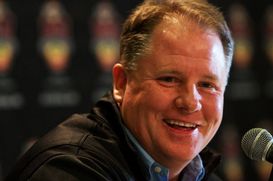 After running the show in Oregon for four years, Chip Kelly is heading to Philadelphia.

That is, until Wednesday afternoon, when Philadelphia cannonballed into the pool and made the biggest splash of 2013: Chip Kelly will be the next head coach of the Philadelphia Eagles.

Now comes the reactionary process. Will Kelly be able to make a successful transition from the collegiate ranks to the NFL, or will he flame out like Steve Spurrier and Nick Saban, only to return to the minor leagues?

The bottom line is that nobody knows. We can predict, project and assess, but we can’t speak with certainty. This is a transition that will take both time and patience, complete with the personnel changes necessary to give Kelly his best chance for success.

Never mind the fact that Kelly has exactly zero years of NFL experience on his resume. Don’t focus on the fact that in four years at Oregon, Kelly had just 14 players (6 offensive, 8 defensive) selected in the NFL draft, none of which heard their names called during the first round.

Kelly sells innovation and creativity, but in the immediate future, he’ll be selling hope and tickets. That’s what a signing like this does for a team and nobody knows that better than the Philadelphia Eagles. They are the masters of selling hope.

Don’t believe it? It didn’t even take a full sixty minutes after the Kelly news broke for the Wynn sports book in Las Vegas to adjust the odds on Philadelphia winning the 2014 Super Bowl from 30-1 to 22-1. The Wynn is expecting the Philadelphia money to come pouring in.

Because that’s what a signing like this does. It brings hope, while quickly erasing the memories of the team’s worst regular season performance since 1998.

Just like Michael Vick and Nnamdi Asomugha before him, it’s now Kelly’s turn to live up to the hype. To meet the expectations of a Super Bowl-starved city that grow larger by the second. That’s what happens when the Peyton Manning’s of the world sign in Denver and the Chip Kelly’s land in Philadelphia.

The expectations grow exponentially with the hype. And the cash register doesn’t stop ringing.