Pittsburgh linebackers continue to get paid

Playing linebacker for the Pittsburgh Steelers is often accompanied by a certain level of prestige comparable to that of being a prizefighter from Mexico or software designer from Silicon Valley. 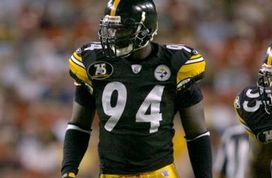 It can also bring with it enormous amounts of cash.

A 2007 first-round pick out of Florida State, Timmons started 15 games for the Steelers last season, racking up 132 tackles (8th in NFL) and three sacks in the process.