Point spread plummets with news that Favre will start

He may be a banged-up, 41-year-old quarterback with a passer rating of 69.6, but the betting public still believes that Brett Favre is a winner.

Las Vegas sportsbooks saw a late flurry of action on the Vikings Monday evening as news surfaced out of Minnesota that Favre would start against the Chicago Bears at TCF Bank Stadium. 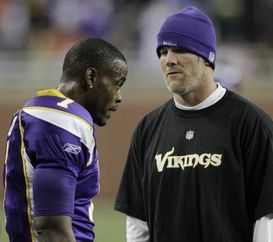 After missing last week's game, Favre is back.

The Bears opened the week as a 9-point favorite with virtually no movement taking place until Monday afternoon’s announcement that Favre had been upgraded from “out” to “questionable.” Following the injury report adjustment, the point spread quickly starting drifting towards the Vikings. According to ScoresandOdds.com, the Bears were 8-point favorites at 10:45am Monday morning.

Less than ten hours later, the line had dropped to Chicago -6.5. In Las Vegas, the Hilton sportsbook currently has the Bears as a 5.5-point favorite, while Caesars Palace and The Orleans have pulled the game off the board.

An interesting note to keep in mind is that 60% of the betting public is currently backing the Chicago Bears, according to Pregame.com.

Would you feel more comfortable taking the Bears and laying the points or backing a busted-up Favre and the Vikings?