Raheem Brock re-ups with the Seahawks

After spending the first eight seasons of his career in Indianapolis, defensive end Raheem Brock signed with the Seattle Seahawks in 2010 and recorded a career-high nine sacks without making a single start. 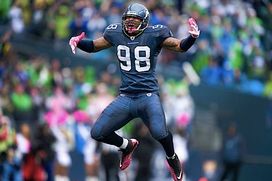 Raheem Brock is back with the Seahawks.

As a result, the Seahawks have decided to bring him back for another go.

Jason La Canfora of the NFL Network reports that the 33-year-old Brock and the Seahawks have reached an agreement on a one-year deal. Financial details of the contract weren’t immediately made available.

While the Tarvaris Jackson signing will continue to raise a negative reaction from a majority of the fans, Pete Carroll and the Seahawks have brought in a lot of talent over the past two weeks in an effort to successfully defend last year’s NFC West divisional title.

I may be in the minority on this one, but I’m a bit shocked the team is listed at 5/1 to win the NFC West, behind the Cardinals, 49ers and Rams.