Rams get Bradford some o-line help

We haven’t heard much from the Rams this past week as the team has mostly stayed off the national radar in regards to the high-profile free agents who are looking to score fat new contracts. 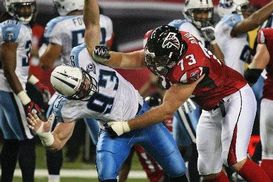 The addition of Dahl (right) gives the Rams one of the stronger lines in the NFC.

But St. Louis made a solid move Friday afternoon when the organization reached an agreement on a four-year deal with offensive guard Harvey Dahl, per Adam Schefter of ESPN.

Dahl—a five-year veteran out of Nevada—made 43 starts at guard for the Atlanta Falcons over the past three years and can immediately provide some veteran leadership to one of the youngest offenses in the NFC.

With offensive tackles Jason Smith and Rodger Saffold along with center Jason Brown and now Dahl, second-year quarterback Sam Bradford has to be excited about the direction this offense is headed.