The Baltimore Ravens began the second day of the 2013 free agent period much like they did the first: By saying goodbye to a productive member of their Super Bowl roster.

Gone is strong safety Bernard Pollard, who broke the news himself via his twitter account Tuesday morning. 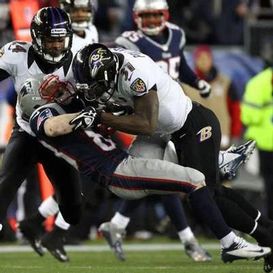 “Well Raven Nation it’s been fun. My time in Baltimore is done…Thank you!”

The seven-year veteran had three years left on a 2012 contract renegotiation that was scheduled to pay him $2 million in base salary in 2013 while carrying a cap number of $3.25 million. Pollard now becomes an unrestricted free agent and is free to sign anywhere.

The move makes the 28-year-old safety the latest in a growing line of Ravens to leave town just over one month after helping the city to hoist the Vince Lombardi Trophy. Wide receiver Anquan Boldin was traded to San Francisco while outside linebacker Paul Kruger and inside linebacker Dannell Ellerbe cashed in their chips on Day 1 of free agency, with the Browns and Dolphins, respectively.

Pollard started 13 games for the Ravens in 2012, amassing 98 tackles, two sacks and one interception while grading out as Pro Football Focus’ 29th-best safety from a year ago.

While nothing is certain, Baltimore’s decision to release Pollard could be the initial step in bringing Pro Bowler Ed Reed back to town.