For the second consecutive offseason, Eagles cornerback Asante Samuel finds himself on the trading block. But the big question is whether or not the Philadelphia front office will be able to find a trade partner willing to offer up enough in return to close the deal this time around.

Jeff McLane of the Philadelphia Inquirer reports that the Eagles will attempt to trade the 31-year-old Samuel prior to April’s draft. 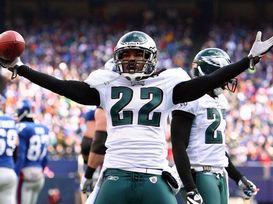 Is Asante Samuel's time in Philadelphia coming to an end?

It’s hard to believe that four years have already passed since the Eagles made a cannonball-like splash into the free agent waters by signing Samuel to a six-year contract worth approximately $57 million. Philly’s investment in the former New England Patriot wound up paying big dividends as Samuel racked up 23 interceptions and earned three trips to the Pro Bowl in his four seasons with the Birds.

But things change quickly in the NFL and three years after signing Samuel, Philadelphia went out and made two more big acquisitions at the cornerback position by signing free agent Nnamdi Asomugha and trading for Dominique Rodgers-Cromartie. The moves caused a rift between Samuel and the Eagles front office and led to trade talks prior to the start of the 2011 season.

Now, the trade talks are back on. Samuel is set to make $9.5 million in 2012 and with Asomugha and Rodgers-Cromartie more than capable of locking down the two cornerback positions, the Birds will likely look to increase their draft picks by sending Samuel to another city.

With three quarterbacks (Brees, Brady, Stafford) each throwing for over 5,000 yards in 2011, the demand for quality players at the cornerback position has never been higher. The Cowboys just shelled out close to $50 million for former Chief Brandon Carr while the Buccaneers spent $37.5 million on former Lion Eric Wright.

Samuel is sure to draw some interest, but whether or not it’s enough to get the Eagles to agree to send him packing remains to be seen.