Report: Osi no longer allowed to seek a trade

This probably won’t go over too well.

Just two days after getting permission to seek a trade, defensive end Osi Umenyiora has been told by the New York Giants that he is no longer allowed to do so, per Mike Garafolo of the Newark Star-Ledger. 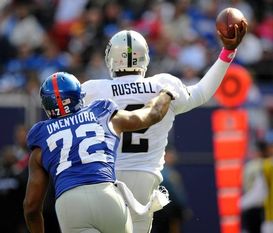 ICONWill Umenyiora play for the Giants this season?

The 29-year-old has been disgruntled about his current contract situation for quite some time and has had no problem letting both the team and the media know about it. Umenyiora is set to earn $7.1 million in base salary over the next two seasons.

The Giants initially wanted a first-round pick in exchange for the two-time Pro Bowler, but reportedly lowered their asking price when the market failed to produce any takers.

One thing we can take away from the latest development in this ongoing saga is that it looks like Umenyiora may finally have to come to the realization that he’s not worth as much as he thinks he is.

That, and he’ll probably have something to say about this in the very near future.