After seven seasons in Miami, Ricky Williams is headed north. 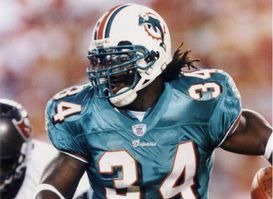 Ricky Williams is headed to Baltimore to back up Ray Rice.

ESPN is reporting that the veteran running back agreed to a two-year deal with the Ravens on Monday worth $4 million.

Williams had appeared in every game for the Dolphins over the last three years, recording 2,453 yards and 17 touchdowns in the process.