A member of the Ravens for only nine days, Rolando McClain’s fresh start in Baltimore has already been marred by the type of nonsense that got the linebacker run out of Oakland. 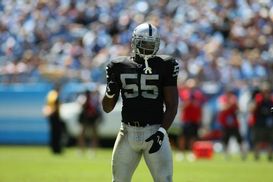 ICONRolando McClain was once again arrested in his hometown of Decatur, Alabama.

According to the report, McClain and several other people were ordered by police to leave a park that they had gathered in earlier in the evening. McClain allegedly refused the request and then proceeded to curse at the officers on the scene. He was then handcuffed and taken to jail before bonding out Sunday evening.