Saints could be without another key weapon on Saturday

The depth the New Orleans Saints possess at some of the integral offensive skill positions is one reason why this team has a chance to upset the Green Bay Packers for the right to represent the NFC in February’s Super Bowl.

However, the team is already down a running back now that rookie Mark Ingram has been placed on injured reserve due to a toe injury and that remaining depth is likely to be tested Saturday against the Detroit Lions as the Saints could find themselves without another key component. 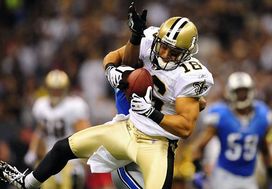 Moore scored a touchdown in the Saints' 31-17 win over Detroit back in December.

Jeff Duncan of the New Orleans Times-Picayune, in response to being asked on twitter if he thinks wide receiver Lance Moore (hamstring) will play this weekend, replied, “Strictly a guess but…No.”

The 28-year-old Moore re-aggravated the hamstring injury in Week 16 against the Atlanta Falcons after catching just two passes for 53 yards. On the season, Moore hauled in 52 passes for 627 yards and eight touchdowns on 73 targets in 14 appearances.

If Moore is unable to go, quarterback Drew Brees will still have plenty of firepower at his disposal for Saturday’s rematch against a Lions team the Saints defeated 31-17 back on December 4.

Entering the wildcard round with the league’s 22nd-ranked pass defense (239.4 yds/gm) and with the still-fresh memory of Brees torching them for 342 yards approximately one month ago, you can bet the Lions will take any help they can get for this one.