Don’t sleep on the New Orleans Saints this year.

19 months removed from their first Super Bowl win in franchise history, the Saints have been quietly stockpiling talent on both sides of the football in preparation for another run at the Vince Lombardi trophy. 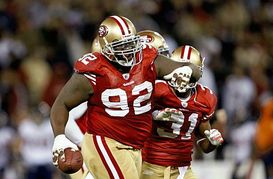 Big Aubrayo Franklin is headed to the Big Easy.

In addition to re-signing safety Roman Harper and wide receiver Lance Moore, not to mention the addition of free agent running back Darren Sproles, the Saints were at it again on Tuesday afternoon as the team reached an agreement on a one-year deal with free agent nose tackle Aubrayo Franklin, per Adam Schefter of ESPN.

An eight-year veteran out of Tennessee, Franklin spent the first four years of his career with the Baltimore Ravens before joining the 49ers in 2007. The 30-year-old has spent the majority of his career playing nose tackle in a 3-4 defense, but will likely be moved to defensive tackle in Gregg Williams’ 4-3 system.

With the addition of Franklin and the Tuesday signing of first-round pick Cam Jordan (DT, California), you can’t help but think the Saints have had a tough time forgetting what Marshawn Lynch did to them in Seattle during the first round of last year’s playoffs.