It took 27 games over a two-year period for the Buffalo Bills to acknowledge their mistake and unload former first-round pick Aaron Maybin. 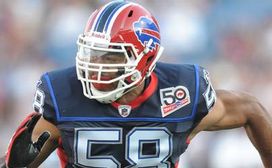 Maybin is once again a man without a team.

It only took the New York Jets 18 days to come to the same conclusion.

Rich Cimini of ESPN New York is reporting that the Jets have waived linebacker Aaron Maybin. The 23-year-old from Penn State was the 11th overall pick in the 2009 draft.

So Maybin now finds himself back on the street for the second time in less than a month. At this point, it will be interesting to see if any other team expresses interest in a guy that has been cut more times (2) than he has recorded sacks in his career (0).