NEW ORLEANS—Dark, ominous clouds float above the Crescent City much the way bad luck and even worse baseball hover above the Chicago Cubs franchise. It’s been raining in New Orleans over the last few days but the city’s inhabitants are distraught and preoccupied with more pressing issues than some moisture on a 72-degree day.

Saints head coach Sean Payton—who was the toast of the town just 24 months ago after bringing home the city’s first Vince Lombardi Trophy—has been suspended for the entire 2012 season by Commissioner Roger Goodell for his failure to stop the Saints’ bounty program. 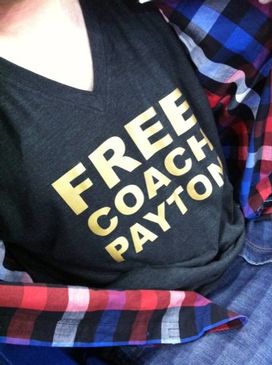 Local New Orleans businesses have already responded to the punishment handed down by Commissioner Goodell.

Local business owners have already capitalized on the frenzy as shirts bearing the slogans, “Free Sean Payton” and “Brees For Coach” have begun popping up all over the French Quarter and beyond. Saints fans believe the first penalties handed down for “Bountygate” were too harsh. A year for the head coach when defensive players are inherently programmed to destroy offensive counterparts? How are the Saints supposed to become the first team in league history to play in the Super Bowl their city is hosting if they don’t have a head coach?

But the more you talk with Saints fans in New Orleans, the more you realize their disappointment outweighs their shock and disbelief in the stiffness of the sanctions. The Commish is sending a message: There is no room for a bounty program in the NFL.

And you can bet the other 31 NFL franchises have taken notice. Message delivered.

Just over 1,300 miles to the northwest, fans in the city of Denver recently traded one roller coaster ride for another. After a two-week pursuit of free agent Peyton Manning, the Broncos sealed the deal and made one of the most notable position changes in league history.

Fan favorite Tim Tebow was shipped to the Jets after a captivating playoff run as the organization now prepares for life in the AFC with Peyton Manning under center.

The message? John Elway and John Fox were never 100% sold on Tebow’s long-term potential as an NFL signal-caller. Acquiring Manning was the only way the Broncos front office could part ways from Tebow without facing a massive backlash from the public. After all, it’s not every day that a team has a chance to acquire one of the greatest quarterbacks in NFL history.

It’s a risky move, but it’s also a calculated gamble on the part of Elway. The worst-case scenario is that Manning flops and Tebow winds up winning games under center in New York. As unlikely as that may seem, the possibility—however small—does exist. The more conceivable outcome is that Manning wins games and Tebow waits for Mark Sanchez to tank so he can get some playing time in New York.

By acquiring Manning, Elway has put the league on notice. The Broncos are going after it next season.

From the disappointment in New Orleans to the anticipation in Denver, we make our way to Chicago where the Bears front office has sent a different kind of message that could open up Pandora’s Box in regards to future contract negotiations.

After making all the necessary plays, saying all the right things and behaving 100% in a professional manner, running back Matt Forte still doesn’t have his long-term contract extension. Not only that, but the Bears went out and signed free agent running back Michael Bush this week, sending Forte to twitter to share his thoughts on the matter:

“There's only so many times a man that has done everything he's been asked to do can be disrespected! Guess the GOOD GUYS do finish last....”

“for the record I'm not mad at the signing of another running back. This is 4th time that's happened. I embrace competition as well as help”

“But as for not taking care of ur own and undervaluing a player under his market value is another story! #twitterrant”

In Chicago, the message is as clear as a July day on Lake Rangeley in Maine: If you play for the Bears and have outperformed your current contract, hold out. Don’t play it the right way and don’t assume the organization has your back. In the case of Forte, the Bears just don’t appear willing to give the guy what he’s truly worth.

Signing Bush gives the Bears a devastating 1-2 running back punch that—along with the trade to acquire Pro Bowl wide receiver Brandon Marshall—could be enough to get this team back to the Super Bowl. Bush brings depth, power and starter’s experience to the table. The team is better off having him on the roster.

From a personnel standpoint, it’s a solid move. From a business standpoint, failing to take care of Forte after everything he’s done has let the rest of the team know that there is no reason to play it the classy way when looking for a new contract. The Bears clearly aren’t interested in that.

Three cities, three teams, three messages. Even in the midst of the insanity that is March Madness, the NFL once again found a way to dominate the headlines this past week. The league has sent a message that the NFL truly is the most popular sport in the country.