For a 24-year-old who is just two years removed from an 83-catch season that resulted in a trip to the Pro Bowl, we were a bit surprised free agent wide receiver Sidney Rice wasn’t getting more press this week. 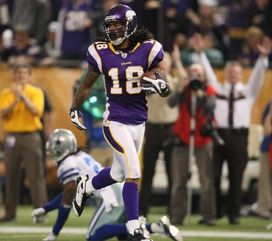 Thanks to Jay Glazer of FOX Sports, that’s about to change.

Per a recent Glazer tweet, Rice has reached an agreement with the Seahawks on a five-year deal to play football in Seattle. In an interesting twist, he’ll join former Vikings teammate and new Seahawks quarterback Tarvaris Jackson in the Pacific Northwest.

According to Mike Florio of ProFootballTalk.com, the deal is worth a bottle-poppin’ $41 million with $18.5 million guaranteed.

As for Rice, the four-year-veteran will join 2010 breakout sensation Mike Williams to form one of the biggest and most dangerous receiving tandems in the NFC West.

Although he appeared in just six games last season due to a hip injury, Rice is only two years removed from a Pro Bowl season that consisted of 83 receptions for 1,312 yards and eight touchdowns for a Vikings team that made it all the way to the NFC Championship game.

Prior to the move, the Seahawks were listed at 60-1 to win the Super Bowl.

Lets see if anything changes now that Rice is in town.

Will signing Sidney Rice get the Seahawks back to the playoffs? Discuss it now in the NFP Forums!