A noticeable stink has permeated the Phoenix air over the last few days as word emerged from the 2013 owners meetings that the NFL Competition Committee had issued a proposal to penalize runners for lowering their heads into tacklers. Not surprisingly, the proposal incited a vitriolic reaction from current and former players, fans and even a few coaches.

On Wednesday, the proposal passed. Runners can no longer use the crown of their helmet in the open field.

The question of how you make a sport that is inherently violent in nature safer for those who play it is once again at the forefront of the league’s agenda.

Unfortunately, the answer is you can’t. 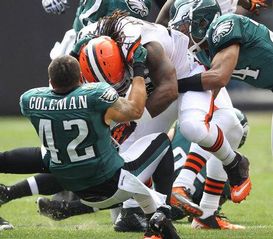 Hits like the one Browns running back Trent Richardson put on Philly's Kurt Coleman have been outlawed.

But before we bash the “No Fun League” for attempting to institute yet another policy that many feel will tarnish the competitive nature of the game, we must first look at the league’s motives for such a proposal. It’s not necessarily that the NFL wants to make the game safer, it’s that the NFL has to present the appearance that it is trying to make the game safer. Public pressure is mounting. New studies detailing the damage done by repeated blows to the head seem to surface every month. Throw in a concussion lawsuit brought by former players and you can see why it’s imperative the NFL demonstrate that they are doing everything in their power to make the sport less violent.

The NFL’s efforts to make professional football safer would be akin to an attempt made by Major League Eating to issue a mandate that all participants be required to obtain a prescription for Lipitor. Major League Eating doesn’t want to see Joey Chestnut keel over from a heart attack on July 4, so perhaps forcing him to take cholesterol medication would help to offset some of the damage done by consuming 60 hot dogs in a span of ten minutes.

Even a healthy dose of Lipitor would be powerless against the intake of 20,000 calories in 600 seconds time.

Hall of Fame running back Marshall Faulk was one of the first to decry the NFL’s new rule. “This is a joke,” Faulk stated on the NFL Network. “If you’re a ball carrier and you’re trying to protect yourself, you’re going to duck. I understand they want safety and I’m all for safety within the game. But it can’t just be some old guys in the room who didn’t carry a football making rules that are really going to affect how this game is being played. I just don’t understand.”

Faulk went on to say that if the league thinks the helmet is a weapon, then the NFL should just get rid of the protective headgear altogether.

This is an interesting concept that has been raised before in conjunction with comparisons of football to the sport of rugby. Not only do rugby players compete without the aid of protective headgear, but they also happen to be some of the best form tacklers on the planet. Better than what you see in the NFL. Rugby players wrap and drive, just like they teach you to do in Pop Warner. They don’t go for the head-to-head kill shot like safeties in the NFL because they don’t have a protective weapon residing between their skull and their opponents.

But there’s a big problem with the football-rugby comparison. Rugby players suffer concussions, too. Some studies suggest that the sport produces a similar amount of, if not more, head injuries than football. Why? Because rugby, like football, is dangerous. And participating in a dangerous activity increases the likelihood of sustaining an injury.

But the bottom line is that despite the rule changes and technological advances made to protective equipment, the NFL is spinning its wheels. Professional football is dangerous. The players know it, the league knows it, the fans know it.

You simply cannot morph something that is violent into something that is safe, just like you can’t take a lion and tell him not to hunt. You can put the lion in a zoo and watch the killer instinct slowly flicker from his once predatory eyes, but at some point, he ceases to be a lion.

At some point, the lion becomes a pet.