Same Bat-time, same Bat-channel. The Week 12 GameDay fantasy live chat kicks off Sunday morning at 10:30am eastern and runs for one full hour. We’ll be talking Starts & Sits, injury updates, weather reports, point spread movements, survivor selections and more. To access the chat, hit up the homepage of the NFP and look under the “Hot News & Rumors” section.

Note: We lost with Atlanta in Week 5, Tennessee in Week 10 and Houston in Week 11. Needless to say, we’re out of the survivor game. But for those of you still in play, we’d look to the following teams:

CLICK HERE to check out all of the current Week 12 lines.

Eli Manning, QB, New York Giants (vs. Dallas): It’s been a disappointing year for the Big Blue signal-caller, but things are looking up for Manning in Week 12 with a matchup against a Dallas defense that has surrendered more fantasy points to opposing quarterbacks than any other team in the league this season (26.9 pts/gm). Take note that the last time these two teams got together (Week 1 in Dallas), Manning posted his best statistical effort of the season, with 450 passing yards and four touchdowns.

Zac Stacy, RB, St. Louis Rams (vs. Chicago): Has carried the rock a staggering 79 times over his last three starts, resulting in 323 rushing yards and three scores. Ride the hot hand this Sunday against a Chicago defense that currently ranks 31st in the NFL against the run (133.9 yds/gm) while surrendering an average of 21.4 fantasy points per game to opposing running backs this season (seventh-most in NFL). Stacy is rested and refreshed coming off his bye week, while Chicago just wrapped up a six-hour overtime tilt with the Baltimore Ravens last Sunday. 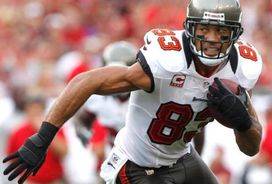 Jackson should have no problems shredding Detroit's secondary.

Vincent Jackson, WR, Tampa Bay Buccaneers (at Detroit): Jackson has been targeted 11 or more times in seven of ten starts this season and is coming off a monster performance against the Atlanta Falcons last Sunday in which the star wideout caught ten passes for a season-high 165 yards and a touchdown. Look for more of the same this weekend in Detroit against a porous Lions secondary that currently ranks 30th in the NFL against the pass (283.8 yds/gm) while giving up an average of 29.9 fantasy points per game to opposing wide receivers this season (second-most in NFL).

Rashad Jennings, RB, Oakland Raiders (vs. Tennessee): Has been solid in place of the injured Darren McFadden, carrying the ball 57 times for 340 yards and two scores over his last three outings. McFadden will once again watch from the sidelines in Week 12, meaning Jennings gets to handle the workload against a Tennessee defense that ranks 20th in the NFL against the run in 2013 (117.1 yds/gm) while permitting an average of 21.9 fantasy points per game to opposing ball carriers (sixth-most in NFL).

Kendall Wright, WR, Tennessee Titans (at Oakland): Hasn’t found the end zone since Week 2, but Wright makes for a solid WR3 in leagues with ten or more teams this weekend when he and the Titans travel to Oakland for an AFC showdown with a Raiders defense that ranks 25th in the league against the pass (252.7 yds/gm) while allowing an average of 25.4 fantasy points per game to opposing wideouts this season (seventh-most in NFL). Note that Wright has amassed 12 or more targets in two of his last four outings and enters Sunday on extra rest, having played the Indianapolis Colts last Thursday night.

Garrett Graham, TE, Houston Texans (vs. Jacksonville): Is coming off a career-high 7-136-1 (13 targets) stat line against Oakland in Week 11 and faces a Jacksonville defense this Sunday that has surrendered an average of 11.6 fantasy points per game to opposing tight ends in 2013 (second-most in NFL). Graham received a stock bump earlier this week when head coach Gary Kubiak announced that Case Keenum would start at quarterback for the Texans on Sunday.

Baltimore Ravens, D/ST (vs. NY Jets): The Jets are averaging just 288.6 total yards and 15.2 points per game in five road contests this season (1-4), with 14 turnovers and 32 penalties. We could elaborate on New York’s road woes or perhaps write a catchy closing sentence to this paragraph, but those stats speak volumes as to why we love this play in Week 12.

Robert Griffin III, QB, Washington Redskins (vs. San Francisco): Griffin’s come on relatively strong as of late, with five passing touchdowns over his last two starts. But those numbers came against the shaky secondaries that reside in Minnesota and Philadelphia. Week 12 offers a far greater challenge against a pissed off San Francisco defense that is permitting an average of just 16.7 fantasy points per game to opposing quarterbacks this season (fifth-fewest in NFL). The primetime home field advantage should play to RG3’s favor, but we don’t expect a big output on Monday night.

Ray Rice, RB, Baltimore Ravens (vs. NY Jets): Rice has gone full-on bust mode in 2013, with just one rushing touchdown over his last five starts and a per game rushing average of only 46.6 yards per game. Don’t expect the tides to turn in Week 12 against a Jets defense that currently leads the league in rushing defense (73.2 yds/gm) while surrendering an average of just 12.8 fantasy points per game to opposing running backs this season (third-fewest in NFL).

It's been a bust of a season for Ravens running back Ray Rice.

Mike Wallace, WR, Miami Dolphins (vs. Carolina): Wallace and his monster free agent contract have found the end zone exactly one time this season (Week 2), with the former Pittsburgh Steeler failing to eclipse the 100-yard receiving mark in five straight outings. Don’t expect a reversal of fortune on Sunday against a nasty Carolina secondary that currently ranks fifth in the NFL against the pass (209.5 yds/gm) while giving up an average of just 14.5 fantasy points per game to opposing wide receivers this season (second-fewest in NFL).

Donald Brown & Trent Richardson, RBs, Indianapolis Colts (at Arizona): Richardson has been a major disappointment since coming over via a September trade with Cleveland, but Brown has risen to the challenge and finally begun producing some quality stat lines. No matter, this isn’t the week to start either guy as the Colts travel to Arizona to play a Cardinals defense that currently ranks second in the NFL against the run (81.4 yds/gm) while permitting an average of just 12.6 fantasy points per game to opposing running backs in 2013 (second-fewest in NFL).

Antonio Brown, WR, Pittsburgh Steelers (vs. Cleveland): Brown has been on a roll over the last three weeks (18-322-3), but look for that hot streak to come to an end Sunday against shutdown cornerback Joe Haden and the Cleveland Browns. The Cleveland defense is currently surrendering an average of just 18.3 fantasy points per game to opposing wide receivers this season (seventh-fewest in NFL), but there is some upside with veteran Jerricho Cotchery, who won’t have to deal with the headaches of trying to beat Haden up and down the field.

Antonio Gates, TE, San Diego Chargers (at Kansas City): Has found the end zone just once over his last six starts and is averaging only 50.0 receiving yards per game during that same span. Those trends don’t bode well for a Sunday showdown at Kansas City against a Chiefs defense that currently ranks ninth in the NFL against the pass (219.8 yds/gm) while surrendering fewer fantasy points to opposing tight ends than any other team in the league (4.2 pts/gm).

New York Giants, D/ST (vs. Dallas): Don’t let the Giants’ recent four-game winning streak fool you, because those victories came against Josh Freeman, a banged-up Nick Foles, Terrelle Pryor and Scott Tolzien. A Week 12 date with a rested Tony Romo is a far different story, as evidenced by the fact that the last time these two teams got together, Dallas rolled up 36 points in a Week 1 victory. The New York defense has turned the corner over the last month, but this isn’t the spot to ride that wave.