The GameDay live chat kicks off at 10:30am eastern this Sunday with a host (yours truly) that will be recovering from the Montana-Montana State postgame festivities. Let’s try to keep the noise to a minimum. And somebody bring coffee. Lots of coffee.

DETROIT LIONS (+3.5) vs. Green Bay Packers: Taking the Packers -3.5 just looks way too easy. This is a divisional showdown that features a home dog against a defense that will be without Clay Matthews. Sure, Green Bay could waltz into Detroit and blow out the Lions. But we don’t think that happens.

We’re drawing dead in the water, but I’m sure plenty of you have been having some fun fading these picks this season (at least somebody’s making some money out of this). So here are this week’s five selections that, based on history, have no chance of going any better than 3-2.

A new format for Week 11 means a bigger prize pool with a higher probability of winning. Just our way of saying thanks for reading this article all season. It’s a $10 entry this week, but we’ve got $2k in prizes and only 212 total spots.

Andrew Luck, QB, Indianapolis Colts (at Patriots): The rookie from Stanford is averaging 319.0 passing yards per game over his last three starts and travels to New England this weekend to take on a Patriots defense that ranks 29th in the league against the pass (285.3 yds/gm) while surrendering an average of 23.4 fantasy points per game to opposing quarterbacks (fourth-most in NFL). Vegas has this total posted at 54 points for a reason. The bookmakers expect a lot of scoring in this one.

Marcel Reece, RB, Oakland Raiders (vs. Saints): It worked out pretty well last week, so why not ride Reece again this Sunday? With Darren McFadden and Mike Goodson expected to miss another start, look for Reece to handle the workload against a Saints defense that is giving up an average of 24.2 fantasy points per game to opposing running backs this season (third-most in NFL). Reece has touched the ball 28 times over his last two games and we expect another solid total in Week 11. 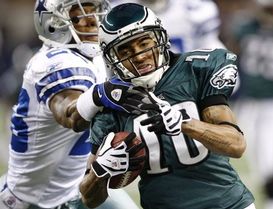 We're betting Jackson and Foles hook up for at least one big play on Sunday.

DeSean Jackson, WR, Philadelphia Eagles (at Redskins): We can understand your apprehension in regards to starting Jackson with rookie Nick Foles under center, but this pick is based on a calculated gamble. D-Jax is a home run threat and we’re betting that against a defense that is surrendering an average of 30.0 fantasy points per game to opposing wideouts (second-most in NFL), Foles and Jackson hook up for at least one big play. Keep in mind that Jackson is averaging 11.0 fantasy points per game over his last three starts against the ‘Skins.

Jamaal Charles, RB, Kansas City Chiefs (vs. Bengals): After spending three straight games pretending that Charles didn’t exist, the Chiefs finally woke up in Week 10 and gave their most explosive offensive weapon a workload worth writing about. Kansas City may have come up short against Pittsburgh on Monday night, but not before Charles could roll up 100 rushing yards and a score on 23 carries. Look for another solid effort on Sunday against a Cincinnati defense that ranks 20th in the league against the run (118.3 yds/gm) while surrendering an average of 20.5 fantasy points per game to opposing running backs this season (seventh-most in NFL).

Steve Smith, WR, Carolina Panthers (vs. Buccaneers): By his standards, Smith is having a down year. But if there were ever a time for the nine-year veteran to bust loose, Sunday against the Buccaneers would be it. Tampa currently ranks dead last in the NFL against the pass (321.3 yds/gm) while giving up an average of 29.2 fantasy points per game to opposing wide receivers (third-most in NFL). And remember, Smith rolled up 106 yards on seven receptions when these two teams met back in Week 1.

Antonio Gates, TE, San Diego Chargers (at Broncos): The sun is setting on Gates’ Hall of Fame career, but he’s still got enough left in the tank for a few more solid outings. We’re thinking one of those will take place this Sunday in Denver against a Broncos defense that is giving up more fantasy points to opposing tight ends than any other team in the league this season (12.3 pts/gm). Expect Philip Rivers to look for Gates in the red zone, as Denver has already surrendered eight touchdowns to opposing TEs this season (most in NFL).

<strong>Joe Flacco, QB, Baltimore Ravens (at Steelers): Never mind Flacco’s 341-yard, three touchdown effort against the Oakland Raiders last Sunday. What you should be thinking about is the fact in four road games this season, the Baltimore quarterback is averaging just 179.8 passing yards per game with three touchdowns, four interceptions and a QB rating of just 62.7. Oh yeah, did we forget to mention that Pittsburgh ranks first in the NFL in pass defense (171.1 yds/gm) and is giving up only 13.9 fantasy points per game to opposing quarterbacks this year (second fewest in NFL)? Our bad. For the second week in a row, Forte owners should leave the Chicago running back on their bench.

Matt Forte, RB, Chicago Bears (at 49ers): We hate to do it to Forte for the second week in a row, but we’ve got to put the Chicago running back on the sit list once again. Monday night at San Francisco is one of the worst possible matchups owners could ask for, as the 49ers currently rank seventh in the league in run defense (95.3 yds/gm) while giving up an average of just 11.6 fantasy points per game to opposing running backs this season (second-fewest in NFL). And with the possibility of Jason Campbell starting at quarterback for the concussed Jay Cutler, the Bears offense could have a lot of difficulty moving the football on Monday.

Vincent Jackson, WR, Tampa Bay Buccaneers (at Panthers): V-Jax has been balling out over the last six weeks, but Sunday in Carolina isn’t the best of situations for the former San Diego Charger. The Panthers are surrendering an average of just 18.6 fantasy points per game to opposin g wide receivers this season (sixth-fewest in NFL) and you have to keep in mind that the last time Jackson squared-off against this defense, the high-priced free agent recorded just four receptions for 47 yards.

Michael Turner, RB, Atlanta Falcons (vs. Cardinals): Turner has found the end zone just once over his last four starts and has topped 65 rushing yards in a game only one time in his last five outings. Leave him on the bench in Week 11 when Atlanta plays host to an Arizona defense that is surrendering an average of just 15.5 fantasy points per game to opposing running backs this season (ninth-fewest in NFL).

Brandon Marshall, WR, Chicago Bears (at 49ers): Marshall has topped 100 receiving yards in four of his last six starts, so we can understand if you plan on disregarding this paragraph and inserting him into the starting lineup anyway. Just keep in mind that backup quarterback Jason Campbell could be under center Monday night against a 49ers defense that ranks fifth in the NFL against the pass (196.8 yds/gm) while giving up just 17.8 fantasy points per game to opposing wideouts (t-third-fewest in NFL).

Owen Daniels, TE, Houston Texans (vs. Jaguars): Daniels currently ranks fifth in fantasy scoring at the tight end position, but don’t get caught overlooking this Jacksonville Jaguars defense. Overall, this unit is pretty crappy. But take note that the Jags are giving up fewer fantasy points to opposing tight ends than any other team in the league this season (4.3 pts/gm). In addition, you have to figure that if the Texans get a big lead on Sunday, the team will be content to run the football in the second half to grind down the clock.

Denver Broncos, D/ST (vs. Chargers): The Broncos currently rank in the top-3 in fantasy scoring at the D/ST position, but we advise you to look for another option in Week 11. The Chargers have had problems protecting the football in 2012, but Vegas has the total for this game posted at 48.5 for a reason. The Bolts are looking for revenge after the egg they laid during the second half of that infamous Monday night collapse a few weeks back. We think Philip Rivers and co. will put up some points in this one.