Plan A: Dallas over Washington
Plan B: Cleveland over Oakland
Plan C: Miami over Jacksonville

Analysis: The big misconception here is that New Orleans will finally decide to start playing some quality football thanks to a Sunday night home game in which a raucous crowd will lead the Saints to victory. Don’t believe the hype. In seven outings this season, Drew Brees and company have yet to put together an impressive performance. This is the week the rest of the country wakes up and realizes that the window has closed and the Saints are in need of a rebuilding effort. The wrong team is favored here.

The Big Puma and I are still in the process of finalizing our Week 8 card, but here are six plays we are currently discussing:

Tony Romo, QB, Dallas Cowboys (vs. Washington): Romo may not be throwing the ball as much this season as in years past thanks to emergence of running back DeMarco Murray, but the Dallas gunslinger has tossed ten touchdown passes over his last four outings, is completing 69.2 percent of his passes on the season and is averaging a healthy 284.3 passing yards per game over his last three outings. Look for another solid outing Monday night against an out-gunned Washington Redskins defense that is currently surrendering an average of 24.0 fantasy points per game to opposing quarterbacks this season (fourth-most in NFL).

Ben Tate, RB, Cleveland Browns (vs. Oakland): Tate is averaging an impressive 21.0 rushing attempts per game since returning from a Week 1 knee injury and should see yet another demanding workload Sunday against an Oakland Raiders defense that currently ranks 29th in the NFL against the run (145.3 yds/gm) while permitting an average of 24.9 fantasy points per game to opposing running backs this season (second-most in NFL). It’s possible that rookie ball-carrier Isaiah Crowell steals some red zone carries against the Silver & Black, but Tate should see more than enough opportunities to rack up a solid fantasy total in Week 8. 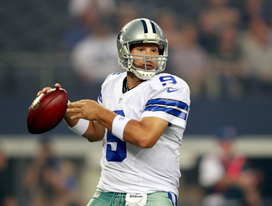 US PRESSWIRELook for another solid effort from Romo on Monday night against the Redskins.

Doug Baldwin, WR, Seattle Seahawks (at Carolina): Stepped up huge in Seattle’s first game without Percy Harvin to the tune of a season-high seven receptions for 123 yards and a score on a team-high 11 targets. Expect another heavily-targeted outing Sunday in Carolina against a suddenly reeling Panthers defense that currently ranks 22nd in the NFL against the pass (250.7 yds/gm) while surrendering an average of 27.9 fantasy points per game to opposing wide receivers this season (fourth-most in NFL). Baldwin has the potential to become one of the league’s top breakout players during the second half of the 2014 campaign.

Joique Bell, RB, Detroit Lions (vs. Atlanta, in London): He’s found the end zone in each of his last two starts, but more importantly, Bell runs head-on into an Atlanta defense on Sunday that ranks 27th in the league against the run (137.7 yds/gm) while surrendering more fantasy points to opposing running backs than any other team in the business this season (28.1 pts/gm). In addition to Bell, owners are also advised to ride with Reggie Bush in Week 8.

Larry Fitzgerald, WR, Arizona Cardinals (vs. Philadelphia): The 11-year veteran and his one touchdown reception have left owners scratching their heads through seven weeks, but this Sunday offers up the perfect opportunity to ride with Fitzgerald one last time before selling high on the Pro Bowl wide receiver next week just before the trade deadline. Why? Because the Philadelphia Eagles currently rank 23rd in the NFL against the pass (256.5 yds/gm) while permitting an average of 26.5 fantasy points per game to opposing wide receivers this year (sixth-most in NFL). Michael Floyd owners should be equally excited about this weekend’s matchup.

Owen Daniels, TE, Baltimore Ravens (at Cincinnati): While Daniels’ upside is relatively limited, the former Houston Texan is coming off a 6-58-1 performance against the Atlanta Falcons last Sunday which included a season-high nine targets. That’s a good sign entering a Week 8 matchup against a Cincinnati Bengals defense that is currently giving up more fantasy points to opposing tight ends than any other team in the league (14.2 pts/gm).

Miami Dolphins, D/ST (at Jacksonville): Even after notching their first win of the season last Sunday, the Jacksonville Jaguars still rank 31st in the NFL in total offense (296.6 yds/gm) and 32nd in scoring (15.0 pts/gm) with an astounding 15 turnovers through seven contests. Do you really need us to go any further?

Matt Ryan, QB, Atlanta Falcons (vs. Detroit, in London): After throwing three touchdown passes in three of his first four starts this season, Ryan and the Falcons have plummeted off a cliff, with the Atlanta signal-caller tossing only one score in each of his last three outings. This team is bad news when asked to play outside the friendly confines of the Georgia Dome, so steer clear of Ryan Sunday in London when he takes on a Detroit Lions defense that is giving up fewer fantasy points to opposing quarterbacks this season than any other team in the business (15.2 pts/gm).

Giovani Bernard, RB, Cincinnati Bengals (vs. Baltimore): Bernard is coming off a dreadful 7-17-0 rushing effort against the Indianapolis Colts and now has to turn around for a Week 8 divisional showdown against a red-hot Baltimore Ravens club that currently ranks seventh in the NFL against the run (87.4 yds/gm) while giving up an average of just 11.8 fantasy points per ga me to opposing running backs this year (third-fewest in NFL). While he’s not the worst option on the board, owners are advised to taper their expectations when it comes to Bernard’s Week 8 potential. 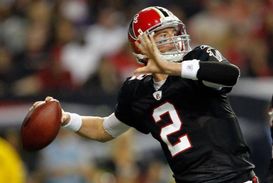 Pierre Garcon, WR, Washington Redskins (at Dallas): With Colt McCoy under center for the Washington Redskins in a Monday night road showdown against a 6-1 Cowboys team, there is no way owners can feel any level of comfort rolling with Garcon in Week 8. Perhaps fellow wide receiver DeSean Jackson breaks a big play on a McCoy prayer, but the reality is that we’ve seen this movie before and it does not end well for the Redskins. Taper your expectations here.

Tre Mason, RB, St. Louis Rams (at Kansas City): One of the hottest waiver wire pickups of the last two weeks, the rookie from Auburn has finally begun to assert his dominance over the St. Louis backfield. The problem, however, is that head coach Jeff Fisher still plans to split, to some extent, the team’s distribution of rushing attempts amongst a variety of ball-carriers. As if that wasn’t enough cause for concern entering Week 8, take note that Kansas City is currently permitting an average of just 14.0 fantasy points per game to opposing running backs this season (seventh-fewest in NFL). There are better options with more upside out there.

Torrey Smith, WR, Baltimore Ravens (at Cincinnati): He’s found the end zone three times in his last two starts, but Smith owners who are suddenly excited over the fact that the Baltimore receiver has decided to deliver this season should look for another option in Week 8. Note that free agent acquisition Steve Smith is quarterback Joe Flacco’s top target these days in addition to the fact that the Cincinnati Bengals are surrendering an average of just 17.2 fantasy points per game to opposing wideouts in 2014 (fifth-fewest in NFL).

Jimmy Graham, TE, New Orleans Saints (vs. Green Bay): The Pro Bowl tight end is battling a shoulder injury that makes him a serious liability when it comes to pass protection. In addition, Graham played just 30 of a possible 75 snaps last Sunday at Detroit, which resulted in zero receptions on two targets. Feel free to roll the dice on Graham Sunday night against the Packers in the hopes of scoring one big red zone opportunity, but don’t expect a knockout performance.

Cincinnati Bengals, D/ST (vs. Baltimore): The wheels have fallen off the bus as Marvin Lewis and the Cincinnati Bengals have been torched for an average of 35.6 points per game over their last three contests. At the current moment, it’s impossible to get behind this football team.