The GameDay fantasy live chat is back in business after a one-week hiatus and will kick-off this Sunday beginning at 10:30am eastern. During the 60-minute session we’ll be talking starts & sits, injury updates, weather reports, Las Vegas point spreads and more. To access the chat, hit up the homepage of the NFP and look for the article under the “Hot News and Rumors” section.

Why: The undefeated Seahawks enter Week 3 as 19-point favorites over a winless Jacksonville team that just spent the entire week on the west coast following their 19-9 defeat at Oakland last Sunday. Seattle has won nine straight at CenturyLink Field and fits all of the criteria we look for in a winning survivor pick. No need to over-think this one. Survive and advance.

Analysis: Backs against the wall, the New York Giants and the NFL’s top-rated passing offense travel to Carolina for a date with a winless Panthers team that ranks 22nd in the NFL against the pass and will be without starting safety Charles Godfrey (Achilles) for this one. Take note that the Giants are 4-1 ATS over their last five meetings with the Panthers, while the underdog in this series is 5-2 ATS over the last seven showdowns.

CLICK HERE to check out all of the current Week 3 lines.

Andy Dalton, QB, Cincinnati Bengals (vs. Green Bay): The third-year signal-caller is averaging 281.0 passing yards per game through his first two starts and gets a crack at a Green Bay defense this Sunday that is surrendering an average of 31.0 fantasy points per game to opposing quarterbacks this season (fourth-most in NFL). Take note that games featuring the Green Bay Packers this season have seen combined point totals of 58 and 62. Expect a similar result here.

Joique Bell, RB, Detroit Lions (at Washington): The ‘Skins currently rank dead last in the NFL in run defense (201.0 yds/gm) and are giving up an average of 25.6 fantasy points per game to opposing ball carriers this season (third-most in NFL). Those are some tasty numbers for Bell owners, assuming starting running back Reggie Bush is held out of action in Week 2 or plays in a limited capacity. Either way, consider Bell a respectable flex option for this Sunday.

ICONThe Red Rifle is staring down the barrel of a potential shootout on Sunday.

Tavon Austin, WR, St. Louis Rams (at Dallas): Two starts, 19 targets, 12 receptions, 88 yards and two scores. With the Las Vegas over/under lined at 47.5 for Sunday’s matchup between St. Louis and Dallas, we’re predicting another strong effort from the rookie out of West Virginia. Take note that only three teams in the league have given up more fantasy points to opposing wide receivers this season than the Cowboys (34.7 pts/gm).

David Wilson, RB, New York Giants (at Carolina): Wilson is killing fantasy owners and that’s putting it mildly. Through two games, the second-year back has amassed a whopping total of just 36 yards on 14 touches with exactly zero trips to the end zone. But we’re giving him one last shot before throwing in the towel as Sunday’s matchup comes against a Carolina defense that is surrendering an average of 20.2 fantasy points per game to opposing running backs this season (seventh-most in NFL). Big Blue is up against a wall at 0-2 and needs a big effort in Week 3 or they can kiss this season goodbye.

Brian Hartline, WR, Miami Dolphins (vs. Atlanta): Miami’s leader in both receptions (14) and receiving yards (182) through two games, Hartline has a great matchup on deck with a banged-up Atlanta defense that is surrendering an average of 33.5 fantasy points per game to opposing wide receivers this season (sixth-most in NFL). This is a statement game for the 2-0 Dolphins, who are receiving little love from the mainstream media after back-to-back road wins to open the 2013 campaign. We have a feeling that will change come Sunday evening.

Jordan Cameron, TE, Cleveland Browns (at Minnesota): Has rolled up 14 receptions for 203 yards and a score on 20 targets through the first two games of the season and faces a Minnesota defense on Sunday that is giving up an average of 14.0 fantasy points per game to opposing tight ends this season (eight-most in NFL). It worked for us last week, so why not ride the hot hand again?

Minnesota Vikings, D/ST (vs. Cleveland): Yes, this somewhat contradicts the Cameron recommendation from above, but the Vikings are 0-2 and return to Minnesota for their first home game of the season this weekend. What’s waiting is a Cleveland offense that is averaging an anemic 8.0 points per game in 2013 (second-fewest in NFL). Expect the crowd noise and the panic situation to favor the Vikings in a big way this Sunday.

Andrew Luck, QB, Indianapolis Colts (at San Francisco): In the two seasons that Jim Harbaugh has been at the helm in San Francisco, the 49ers have lost eight regular season matchups. In the eight games following those losses, the Niners are 8-0 straight-up and 6-2 against the spread, winning by an average of 17.7 points per game. Further, in those eight showdowns, San Francisco has surrendered more than eight points only twice (13 on both occasions). We expect this trend to continue, which is why a solid game from Luck isn’t in our forecast.

James Starks, RB, Green Bay Packers (at Cincinnati): A popular waiver wire acquisition following the concussion sustained by starting running back Eddie Lacy in Week 2, Starks owners should look elsewhere for RB help this weekend. Cincinnati currently ranks sixth in the NFL against the run (62.5 yds/gm) and is surrendering an average of just 10.8 fantasy points per game to opposing running backs this season (fifth-fewest in NFL). Look for Aaron Rodgers to light up the skies, but expect little from Starks via the ground. 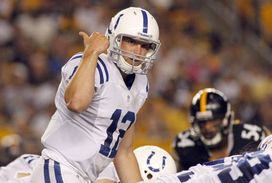 Roddy White, WR, Atlanta Falcons (at Miami): A high ankle sprain has limited White to just five receptions for 40 yards and no scores on five targets through two weeks. Not good. To make matters worse, the Dolphins are surrendering an average of just 17.0 fantasy points per game to opposing wideouts this season (sixth-fewest in NFL). Until White shows us he’s healthy, the best option for owners is to leave him on the bench.

C.J. Spiller & Fred Jackson, RBs, Buffalo Bills (at NY Jets): Through two games, Spiller has amassed 33 carries while Jackson has racked up 25. Both ball-carriers are averaging less than 75 yards per game on the ground, with just one measly touchdown between them. To top it off, the Jets currently rank third in the NFL against the run (59.5 yds/gm) and are giving up an average of just 8.7 fantasy points per game to opposing running backs this season (fourth-fewest in NFL). Pass.

Vincent Jackson, WR, Tampa Bay Buccaneers (at New England): We sure as hell can’t trust his quarterback, who is completing an Arena Football League-worthy 45.3% of his passes. Throw in the fact that the Patriots currently rank fourth in the NFL against the pass (169.5 yds/gm) and are giving up an average of just 17.1 fantasy points per game to opposing wide receivers this season (seventh-fewest in NFL) and you get a terrible situation for Jackson owners.

Kyle Rudolph, TE, Minnesota Vikings (vs. Cleveland): After hauling in nine touchdown passes a year ago, Rudolph has gone through the first two weeks of the season with a stat line that reads 5-69-1. Not terrible, but not worth a Week 3 start against a Cleveland defense that is surrendering an average of just 4.0 fantasy points per game to opposing tight ends this season (eighth-fewest in NFL).

Baltimore Ravens, D/ST (vs. Houston): The Texans have rolled up a rock-solid 901 total yards and 61 points through the first two weeks of the season, so owners are better served hitting the waiver wire for a D/ST with a more favorable matchup.