And then there were two. Congratulations to all of you who have advanced to fantasy championship weekend. This Sunday’s live chat will commence at 10:30am eastern and will run for one full hour, where we’ll be discussing starts and sits, injury updates, weather reports, point spread movements and more. To access the chat, simply hit up the homepage of the National Football Post on Sunday morning and look to the “Hot News & Rumors” section of the site. Hangovers, as always, are more than welcome.

Analysis: This is all you need to know:

*Note: The Big Puma and I won’t have our card finalized until Saturday morning, but here are the games we’re monitoring closely. I’ll be sure to tweet our final selections sometime this weekend.

Kirk Cousins, QB, Washington Redskins (vs. Dallas): It may feel crazy to start a backup quarterback from a 3-12 team during championship weekend, but Cousins isn’t your standard halfway-capable QB2. The second-year signal-caller out of Michigan State threw for 381 yards and three touchdowns at Atlanta in Week 15 and gets a crack at one of the most dreadful defensive units in recent memory on Sunday when the Cowboys come to town. No team in the league is surrendering more fantasy points to opposing quarterbacks this season than Dallas (26.3 pts/gm), which is easy to understand when you take note that Monte Kiffin’s squad has been burned for an average of 32.8 points per game over the last seven weeks.

Jordan Todman, RB, Jacksonville Jaguars (vs. Titans): Only applicable if starting running back Maurice Jones-Drew (hamstring) is ruled out for Week 16. Todman made the most of his first career start last Sunday when the third-year back racked up 153 total yards on 29 touches in a losing effort against the Buffalo Bills. Expect another quality performance in Week 16 against a Tennessee Titans defense that currently ranks 23rd in the NFL against the run (119.1 yds/gm) while surrendering an average of 23.6 fantasy points per game to opposing running backs in 2013 (second-most in NFL). 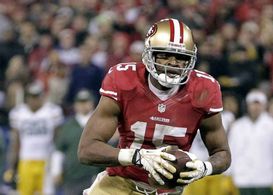 This is the week the Michael Crabtree investment pays off.

Michael Crabtree, WR, San Francisco 49ers (vs. Atlanta): If you’re like this writer and made the long-term investment in Crabtree while doing everything necessary to qualify for a spot in the league championship game, prepare to be rewarded. The Falcons currently rank 25th in the league against the pass (254.9 yds/gm) are surrendering an average of 29.3 points per game on the road and 24.9 fantasy points per game to opposing wide receivers this season (ninth-most in NFL). It seems only appropriate that those of use who saw the endgame in regards to Crabtree enjoy the spoils of what could quite possibly be his only breakout game of the year.

DeMarco Murray, RB, Dallas Cowboys (at Washington): Murray has been killing it over the last three weeks with a total stat line that includes 64 touches for 410 yards and four scores. No sense in fixing something that ain’t broke this weekend, when the Dallas ball-carrier challenges a shoddy Washington defense that is permitting an average of 22.9 fantasy points per game to opposing running backs this season (third-most in NFL). Take note that no team in the NFL has given up more rushing touchdowns this season than Washington (19).

Rueben Randle, WR, New York Giants (at Detroit): Victor Cruz is done for the year and Hakeem Nicks has been M.I.A. for the better part of 11 months now, so look for Randle to capitalize on the biggest opportunity of his career Sunday in Detroit. The Lions currently rank 23rd in the league against the pass (252.9 yds/gm), are giving up an average of 26.8 fantasy points per game to opposing wide receivers this season (third-most in NFL) and we all know damn well that New York will be chucking the ball for four quarters in an effort to stay in the ballgame. Garbage time numbers are in full effect here.

Delanie Walker, TE, Tennessee Titans (at Jacksonville): Has found the end zone in three of his last five outings and posted a 4-62-1 stat line on eight targets back in early November against this same Jacksonville defense. Note that only the Arizona Cardinals (14.7 pts/gm) are surrendering an average of more fantasy points per game to opposing tight ends this season than the Jaguars (10.7 pts/gm).

Detroit Lions, D/ST (vs. NY Giants): It’s a must-win situation at home for a Detroit defense that will square-off on Sunday against a Big Blue offense that has turned the ball over more times this season (39) than any other franchise in the business. Be advised that New York’s turnover total of 39 through 14 games this year is two more than what a league-worst Philadelphia, Jacksonville and Kansas City posted during the full 16-game slate in 2012.

Drew Brees, QB, New Orleans Saints (at Carolina): Yes, I understand that many of you will have no choice (or better options, for that matter) but to roll with Brees in Week 16. I’m in the same spot in one of my leagues. But it’s important for fantasy owners to taper their expectations in regards to the New Orleans quarterback when he and the Saints travel to Carolina to face one of the nastiest defenses in the league in the Panthers. In seven road contests this season, Brees owns a QB rating of just 86.3, with 11 touchdown passes and seven interceptions. The future Hall of Famer isn’t a terrible play in Week 16, but we shouldn’t expect his trademark gaudy stat lines, either.

Andre Ellington and Rashard Mendenhall, RBs, Arizona Cardinals (at Seattle): The Seahawks are surrendering an average of just 14.0 fantasy points per game to opposing running backs this season (fourth-fewest in NFL), which is a number that shrinks even further when you consider that Ellington and Mendenhall will be cutting into each other’s touches. Further, it’s worth noting that over Seattle’s last 14 hom e games, the Seahawk defense has surrendered an average of just 96.3 rushing yards per game with a grand total of only five ground touchdowns permitted. 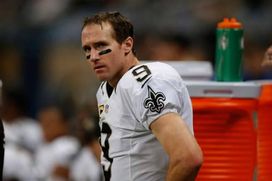 Brees isn't a terrible option in Week 16, but this won't be one of his finer performances.

Roddy White, WR, Atlanta Falcons (at San Francisco): Quarterback Matt Ryan owns a QB rating of just 74.3 through seven road games this season and we don’t see that number improving even a little bit Sunday in San Francisco against a 49ers defense that ranks fourth in the NFL against the pass (199.7 yds/gm) while surrendering an average of only 17.6 fantasy points per game to opposing wide receivers this season (fifth-fewest in NFL).

Andre Brown, RB, New York Giants (at Detroit): The Lions have had plenty of trouble stopping the pass, but this defensive unit ranks fourth in the NFL against the run (98.6 yds/gm) while giving up an average of just 16.0 fantasy points per game to opposing running backs this season (eighth-fewest in NFL). Also worth mentioning is the fact that Brown hasn’t found the end zone in either of his last two games and has amassed just 133 total rushing yards over his last three starts.

Cordarrelle Patterson, WR, Minnesota Vikings (at Cincinnati): Has found the end zone in each of his last two starts and is just two weeks removed from a career-best 141-yard effort against the Baltimore Ravens. But Minnesota hits the road in Week 16 to face a Cincinnati defense that is coming off a loss and ranks seventh in the NFL against the pass (219.6 yds/gm) while permitting an average of only 20.6 fantasy points per game to opposing wide receivers this year (tenth-fewest in NFL). There are better options out there.

Coby Fleener, TE, Indianapolis Colts (at Kansas City): Bottom line: No team in the league is giving up fewer fantasy points to opposing tight ends this season than the Kansas City Chiefs (5.7 pts/gm). And with the Chiefs playing at home and still fighting for the top spot in the AFC West, we expect a big effort from this defensive unit on Sunday.

Arizona Cardinals, D/ST (at Seattle): They’ve been one of the more pleasant surprises of the 2013 campaign, but Week 16 in the hostile environment that is CenturyLink Field is no place to roll the dice with these guys.