Business as usual this weekend, with the Week 10 fantasy GameDay live chat commencing at 10:30am eastern and running for one full hour. Topics of the utmost importance include starts & sits, injury updates, weather reports, point spread movements, survivor selections and more. To access the chat, simply visit the homepage of the National Football Post and look to the “Hot News & Rumors” section.

Why: The Jacksonville Jaguars are 0-8 on the season, losing by an average of 22.25 points per game. This steaming pile of manure ranks dead last in the NFL in total offense (286.5 yds/gm), scoring (10.8 pts/gm) and 26th in turnover differential (-7). The only upside when it comes to Gus Bradley’s crew is that at least they aren’t the Tampa Bay Buccaneers or Miami Dolphins. Hooray for Florida!

Analysis: The Cardinals are rested coming off the bye and are 3-1 both straight-up and against the spread at home this season. On the other sideline resides a Houston team that has dropped six straight contests including last Sunday night’s humiliating defeat in which the Texans blew a 21-3 home halftime lead to the Indianapolis Colts. Houston is now 1-8 ATS over their last nine games overall and has nothing left in the tank, while Arizona is 5-0 ATS over their last five games against teams with a losing record.

CLICK HERE to check out all of the current Week 10 lines.

Eli Manning, QB, New York Giants (vs. Oakland): Is ready to turn the corner following a two-game win streak that fed into New York’s Week 9 bye. Manning couldn’t ask for a more favorable matchup than Sunday’s showdown with an Oakland Raiders defense that just surrendered seven passing touchdowns to Nick Foles in Week 9, ranks 25th in the league against the pass (262.6 yds/gm) and is permitting an average of 23.8 fantasy points per game to opposing quarterbacks this season (third-most in NFL).

Mike James, RB, Tampa Bay Buccaneers (vs. Miami): Blew up for a career-high 158 rushing yards on 28 carries (5.6 YPC) in Week 9 at Seattle and faces a dysfunctional Miami Dolphins football club Monday night that currently ranks 22nd in the league against the run (116.5 yds/gm) while surrendering more fantasy points to opposing running backs this season than any other team in the business (24.5 pts/gm). Take note that the Dolphins have given up at least two rushing touchdowns in three of their last four games. 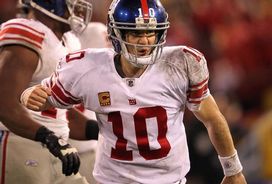 Manning has an excellent chance of lighting up the Oakland secondary.

Keenan Allen, WR, San Diego Chargers (vs. Denver): Has found the end zone and topped 100 receiving yards in three of his last four starts, all while averaging a very healthy 9.5 targets per game. Expect another solid effort from the California rookie on Sunday against a Denver Broncos defense that currently ranks 30th in the NFL against the pass (299.1 yds/gm) while surrendering an average of 26.7 fantasy points per game to opposing wide receivers this season (t-fifth-most in NFL).

Chris Johnson, RB, Tennessee Titans (vs. Jacksonville): It worked out splendidly for us last week, so why not go back to the well one more time before shipping Johnson off in a trade? Following a season-high performance at St. Louis in Week 9 (23-150-2), Johnson hosts a Jacksonville defense on Sunday that currently ranks dead last in the NFL against the run (161.8 yds/gm) while permitting an average of 24.2 fantasy points per game to opposing RBs this season (second-most in NFL). Note that in ten career games against the Jaguars, CJ2K is averaging 102.5 total yards per game with five touchdowns.

Antonio Brown, WR, Pittsburgh Steelers (vs. Buffalo): Is averaging 11.0 targets and 95.5 receiving yards per game over his last six outings and takes on a Buffalo defense this Sunday that currently ranks 18th in the league against the pass (246.9 yds/gm) while giving up an average of 31.0 fantasy points per game to opposing wide receivers this season (second-most in NFL). Be advised that through nine weeks, no team in the league has surrendered more passing touchdowns to the wide receiver position than the Bills (15).

Garrett Graham, TE. Houston Texans (at Arizona): Has posted very modest numbers since taking over for the injured Owen Daniels, but Graham makes for a decent TE option in Week 10 for owners in need of a quick substitute. Why? Because no team in the league is giving up more fantasy points to the tight end position this season than the Arizona Cardinals (15.2 pts/gm). To put that number into perspective, the team surrendering the second-most fantasy points to the TE position in 2013 (Minnesota) is permitting an average of just 11.4 pts/gm.

Tennessee Titans, D/ST (vs. Jacksonville): It doesn’t take a Mensa member to understand the rationale behind this play. The Jaguars rank dead last in the NFL in both total offense (286.5 yds/gm) and scoring (10.8 pts/gm), are without top wide receiver Justin Blackmon for the rest of the season and have already turned the ball over 15 times this year (t-19th-most in NFL). Ride with Tennessee and don’t look back.

Cam Newton, QB, Carolina Panthers (at San Francisco): Newton currently ranks third in fantasy scoring at the quarterback position, so I understand your hesitation regarding this recommendation. Just be advised that San Francisco is coming off the bye riding a five-game win streak in which the team has surrendered an average of just 12.2 points per game to the opposition. In addition, the Niners are currently permitting an average of just 17.4 fantasy points per game to the quarterback position this season (sixth-fewest in NFL). Newton isn’t the worst start in the world for Week 10, but we wou ld definitely taper the expectations for both him and the Panthers.

Giovani Bernard, RB, Cincinnati Bengals (at Baltimore): The good news is that he found the end zone twice in Week 9. The bad news is that Bernard is dealing with some banged-up ribs, has amassed more than 13 carries in a game just once this season and has yet to top 80 rushing yards in any of his nine appearances. Meanwhile, Baltimore is surrendering fewer fantasy points to opposing running backs than any other team in the league this season (10.7 pts/gm). 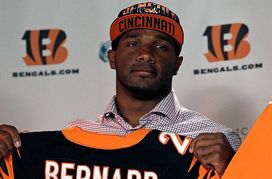 Don't let last week's performance fool you when it comes to Bernard.

Roddy White, WR, Atlanta Falcons (vs. Seattle): Is finally scheduled to return from hamstring and ankle injuries this Sunday, but we advise owners to pass on White in Week 10. Atlanta’s offensive line is going to struggle to keep quarterback Matt Ryan upright in the face of Seattle’s relentless pressure. Speaking of the Seahawks, Pete Carroll’s team currently ranks second in the league against the pass (179.8 yds/gm) and is permitting an average of just 15.6 fantasy points per game to the wide receiver position this season (third-fewest in NFL). Bad situation all the way around.

Zac Stacy, RB, St. Louis Rams (at Indianapolis): Stacy has been white hot over the last two weeks (53 carries, 261 yards, two scores), but hits the road for the first time with quarterback Kellen Clemens this weekend to challenge a non-conference opponent in Indianapolis, who is giving up an average of just 13.7 fantasy points per game to opposing running backs this season (fourth-fewest in NFL). Take note that the Colts have surrendered only one rushing touchdown over their last five games.

Anquan Boldin, WR, San Francisco 49ers (vs. Carolina): Hasn’t found the end zone since September 26, is averaging just 3.5 receptions per game over his last seven starts and faces a Carolina defense on Sunday that is giving up an average of just 15.4 fantasy points per game to opposing wide receivers this season (second-fewest in NFL). That pretty much says it all.

Coby Fleener, TE, Indianapolis Colts (vs. St. Louis): Has the potential to become a breakout tight end in 2014, but is still finding his place within the Indianapolis offense. In addition, despite a 3-6 record, the Rams have done an excellent job defending the tight end position this season, surrendering an average of just 5.1 fantasy points per game (second-fewest in NFL). Bye weeks may have some of you desperate for starters, but look past Fleener when it comes to a TE for Week 10.

Chicago Bears, D/ST (vs. Detroit): Don’t let the Lovie Smith era fool you. Chicago ranks 26th in the NFL in total defense (381.1 yds/gm), 29th in scoring defense (28.2 pts/gm) and takes on a Lions team this Sunday that is coming off the bye and currently ranks third in the NFL in total offense (416.0 yds/gm). This game is totaled at 52.5 points in Las Vegas for a reason.