Think you have what it takes to beat me in a weekly game of fantasy football? Here’s your chance to find out. $300 in prizes and a guaranteed $5 just for scoring more points than I do. Don’t be scurred, it’s just fantasy.

Reason: The Birds are in last place in the NFC East and desperately need a win. On the flip side, San Francisco just spent the whole week chilling in Ohio after grinding out an unimpressive win over the Cincinnati Bengals. The Eagles may fail to cover the nine points, but I like them to win the game.

ATLANTA FALCONS (-4) at Seattle Seahawks: Sitting at 1-2 with divisional rivals Tampa Bay and New Orleans in good shape to go 3-1, Atlanta’s back is against the wall…especially when you factor in their Week 5 date with the Green Bay Packers. This is a must-win situation.

And don’t tell me that Qwest Field is a tough place to play. The Falcons went up there last season and came away with a 34-18 win.

CLICK HERE to check out the rest of the Week 4 odds. 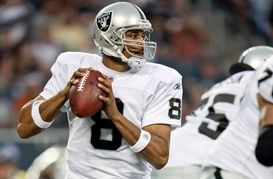 Jason Campbell, QB, Oakland Raiders (vs. New England): Campbell isn’t flashy, but for those of you in need of a situational QB start for Week 4, he’s your guy. The six-year veteran is completing 65.9% of his passes in 2011 (9th in NFL) and takes on a New England secondary this Sunday that ranks dead last in the league in pass defense (377.0 yds/gm). In addition, be sure to note that the Pats are surrendering an average of 29.6 fantasy points per game to opposing quarterbacks (2nd-most in NFL). There’s a reason Vegas set this Over/Under at 52 points when they opened the line: They expect a ton of scoring.

Vegas notes: The Patriots opened the week as a 6-point favorite, but that line was immediately bet down to New England -4, leading many to believe that the Raiders may be the play here.

Tim Hightower, RB, Washington Redskins (at St. Louis): Hightower is coming off an 80-yard, one touchdown performance against the Dallas Cowboys in a game in which the former Arizona Cardinal handled the ball 19 times. Look for the respectable stat lines to continue Sunday in St. Louis against a Rams defense that is giving up an average of 25.6 fantasy points per week to opposing running backs (4th-most in NFL).

Mario Manningham, WR, New York Giants (at Arizona): The four-year veteran has been a bit of a disappointment so far this season, but he’s got a favorable matchup this Sunday at Arizona against a Cardinals team that ranks 25th in the league in pass defense (275.0 yds/gm) and is giving up an average of 25.3 fantasy points per week to opposing wide receivers (9th-most in NFL). We recommend you view Manningham as a WR2/WR3 with upside in Week 4.

Vegas notes: This contest has “letdown game” written all over it for the New York Giants. Coming off a huge win at Philadelphia, this line opened at NYG -3 and was quickly bet down to NYG -1. Don’t be shocked if the Cardinals come away with a win on Sunday.

Greg Olsen, TE, Carolina Panthers (at Chicago): Believe it or not, Olsen currently ranks 10th in scoring among fantasy tight ends this season. In addition, there are two other factors in play here that we’d like you to keep in mind: First, the Bears are surrendering an average of 13.9 fantasy points per week to opposing tight ends this season (3rd-most in NFL) and second, don’t discount the revenge factor here, as Chicago shipped Olsen to Carolina this past summer. He’s going to want to show the Bears they made a big mistake.

Vegas notes: The Panthers are 0-4 against the spread in their last four road games, while the Bears are 4-1-1 in their last six games as a favorite. 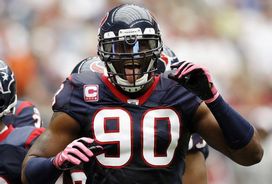 Mario Williams and the Texans D/ST is a strong fantasy play in Week 4.

Houston Texans, D/ST (vs. Pittsburgh): Pittsburgh’s offensive line is in shambles while the Texans are currently a top-five fantasy D/ST in standard scoring formats. Look for Houston defensive coordinator Wade Phillips to bring the heat in an effort to disrupt quarterback Ben Roethlisberger’s timing and rhythm. In addition, keep in mind that the Steelers are surrendering 14.7 fantasy points per week to opposing D/STs, which is currently the third-highest total in the NFL.

Kyle Orton, QB, Denver Broncos (at Green Bay): Orton has failed to top 200 passing yards in each of his last two outings, but we have a feeling that trend will change this weekend in Green Bay. No team in the NFL is surrendering more fantasy points to opposing quarterbacks than the Packers (29.8 pts/gm) and with the high likelihood that Denver will be playing from behind, don’t be surprised if Orton does a nice job rolling up some serious garbage time stats.

Vegas notes: The Packers are 6-1 against the spread in their last seven home games, while the OVER is also 6-1 in the last seven Green Bay home contests.

LeGarrette Blount, RB, Tampa Bay Buccaneers (vs. Indianapolis): The second-year back out of Oregon is coming off a 24-carry performance against the Atlanta Falcons and we predict more of the same Monday night against a Colts defense that currently ranks 22nd in the NFL against the run (113.3 yds/gm). Keep in mind that Colts middle linebacker Gary Brackett is done for the season (shoulder) and that the Indy defense is giving up an average of 20.3 fantasy points per week to opposing running backs (10th-most in NFL).

Denarius Moore, WR, Oakland Raiders (vs. New England): One of 2011’s early-season surprises, Moore is averaging 16.5 fantasy points per game (standard scoring) over the past two weeks and is walking into an extremely favorable situation this Sunday against the New England Patriots. Bill Belichick’s team may be able to roll up a ton of points on offense, but his defense ha s been piss poor this season to say the least. The Patriots currently rank dead last in the NFL in pass defense (377.0 yds/gm) and are surrendering a ridiculous 34.7 fantasy points per game to opposing wide receivers (most in NFL). You gotta ride the hot hand.

Vegas notes: I couldn’t care less what the line is for this game. Tom Brady threw four interceptions last week, so you know he’s coming to play. I’ll take the Patriots and have no problem laying the four.

ICONLeave Tony Romo and his busted ribs on the bench this Sunday.

Tony Romo, QB, Dallas Cowboys (vs. Detroit): His ribs are busted, his best receiver is out with a hamstring injury, he’s coming into this game on short rest and he’s got a date this Sunday with defensive monster Ndamukong Suh and a Detroit Lions defense that is giving up only 12.3 fantasy points per game to opposing quarterbacks this season (3rd-fewest in NFL). Did anything I just mentioned sound positive to you?

Vegas notes: The Cowboys opened the week as 3-point favorites, but the line was quickly bet down to Dallas -1. The early money is on the Lions to go 4-0 for the first time since the 1950’s.

Daniel Thomas, RB, Miami Dolphins (at San Diego): The rookie from Kansas State is battling a hamstring injury and might not be able to play Sunday at San Diego. Even if Thomas manages to find his way into the lineup, there are two big problems with starting him in Week 4: First, his touches will absolutely be limited due to the bad hammy. Second, the Chargers are giving up only 13.1 fantasy points per game to opposing running backs (4th-fewest in NFL). Nothing about this situation looks good for Thomas owners.

Vegas notes: The Chargers opened as 9-point favorites, but this game was quickly bet down to San Diego -7. That might have something to do with the fact that Miami is 5-1 against the spread in their last six games against San Diego.

Anquan Boldin, WR, Baltimore Ravens (vs. New York Jets): In last year’s game against the Jets, Boldin caught seven passes for 110 yards, so you may be asking yourself why we don’t like him this season. Simple: Jets cornerback Darrelle Revis was battling a hamstring injury the last time these two teams got together. With the league’s best cornerback 100% healthy for Sunday night’s showdown, we don’t see Boldin producing the same kind of stat line he did against these guys in 2010.

Vegas notes: The total for this game opened at 40 and is now sitting on the key number of 42. Most people will look at this matchup and think defense, but we think just the opposite. We’re backing the OVER.

Fred Davis, TE, Washington Redskins (at St. Louis): Davis has been a pleasant surprise this season and currently ranks ninth in scoring among fantasy tight ends. But Sunday at St. Louis he runs into a Rams defense that is surrendering just 2.6 fantasy points per game to opposing tight ends (fewest in NFL). For those of you who own the former USC Trojan, it’s time to start thinking about Plan B.

Vegas notes: The underdog is 8-2 against the spread in the last ten meetings between these two teams.

Dallas Cowboys, D/ST (vs. Detroit): The Cowboys currently rank fifth in the NFL in total defense, but Sunday they play host to a Detroit Lions team that ranks fourth in the league in scoring. In addition, opposing D/STs are posting an average of only 6.7 fantasy points per game when playing the Lions (7th-fewest in NFL), so we advise you to take a pass on the ‘Boys this Sunday and look for an alternative option. May we suggest the Tampa Bay Buccaneers?

ICONFlacco is coming off a monster game in Week 3, but we are skeptical about his upside for this Sunday.

Joe Flacco, QB, Baltimore Ravens (vs. New York Jets): We predict that a respectable amount of points will be scored in Sunday night’s showdown between the Jets and the Ravens, but we don’t think Flacco is going to be a big reason why. Be advised that no team in the NFL is giving up fewer fantasy points to opposing quarterbacks this season than the New York Jets (11.6 pts/gm), so we feel it would be safe if you to go in a different direction at QB for Week 4.

Vegas notes: The Ravens opened as 4.5-point favorites, but this line has dropped as low as Baltimore -3 at some shops. The early action is backing Rex Ryan and the Jets.

Mark Ingram, RB, New Orleans Saints (at Jacksonville): The rookie from Alabama scored his first career touchdown last week vs. Houston, but we don’t want that to cloud your judgment entering Week 4. We love Ingram as a running back, but the Jaguars currently rank fifth in the league in rushing defense (83.7 yds/gm) and are surrendering only 11.9 fantasy points per game to opposing running backs (2nd-fewest in NFL). There are better matchups out there.

Vegas notes: The Saints opened as 8-point favorites, but this line dropped as low as NO -6.5 before settling in at NO -7. Some sharp bettors think that New Orleans could be in for a letdown.

Michael Crabtree, WR, San Francisco 49ers (at Philadelphia): Crabtree caught a season-high three passes last week at Cincinnati and we don’t see any reason to believe that number will be any better in Week 4 at Philadelphia. For as bad as the Eagles are at defending opposing running backs and tight ends, they have done an excellent job this season limiting opposing wide receivers. Through three weeks, Philadelphia is giving up an average of just 17.1 fantasy points per game to opposing wideouts (7th-fewest in NFL), so sitting Crabtree for another week is probably the smart decision.

Vegas notes: The 49ers are 0-5 against the spread in their last five games against the Eagles.