Plan A: Detroit over Buffalo
Plan B: Dallas over Houston

Why: I truly believe that Kyle Orton is an upgrade over E.J. Manuel and that his promotion to the starting lineup will boost the fantasy values of wide receivers Sammy Watkins and Robert Woods. But the Lions have been playing some terrific defense this season and are 2-0 at Ford Field in 2014 while outscoring the opposition 54-21. Buffalo may hang tight for a bit here, but Matthew Stafford and company will pull away in the second half and move to an impressive 4-1 on the season.

Analysis: The Bears have had their troubles at Soldier Field in 2014, but outside the Chicago city limits is a different story. Marc Trestman’s squad is 2-0 on the road this year (49ers, Jets) with just one turnover and an average margin of victory of 8.0 points per game. The Panthers are on a two-game losing streak, have a running quarterback who can’t run and a depleted arsenal of offensive firepower that has managed just 29 points in its last two outings. We think this is an underrated matchup for Jay Cutler and the Chicago offense. Take note that while most shops are currently dealing Chicago +2.5, some +3s have begun to pop up offshore, per Sportsbook Review.com. That's what you're gunning for here.

Stop traffic, but the Big Puma and I finally settled on a five-game card before this story’s deadline for the first time in 2014. Here’s the rundown:

Ben Roethlisberger, QB, Pittsburgh Steelers (at Jacksonville): He’s averaging 273.0 passing yards per game this season with five touchdown tosses over his last two efforts, but the primary reason for the Big Ben love has to do with the fact that the Pittsburgh quarterback has the most favorable matchup on the Week 5 board. Through four weeks, no team in the league is surrendering more fantasy points to opposing signal-callers this season than Jacksonville (28.3 pts/gm), which includes a league-worst 11 passing touchdowns permitted. After tanking at home to the previously unbeaten Buccaneers in Week 4, expect a quality bounce-back performance from the Black & Yellow this Sunday.

Zac Stacy, RB, St. Louis Rams (at Philadelphia): Sure, the Philadelphia defense has only given up one touchdown via the ground this season, but through four weeks, the Birds have been torched for an average of 133.8 rushing yards per game (26th in NFL). San Francisco’s Frank Gore ran wild on this unit last Sunday (119 yards) while first-round bust Trent Richardson and former New York Giant Ahmad Bradshaw combined for 149 yards against this defense in Week 2. Stacy’s had a week off to freshen up those legs and should handle a heavy workload Sunday at Lincoln Financial Field in an effort to keep Nick Foles and company off the gridiron. 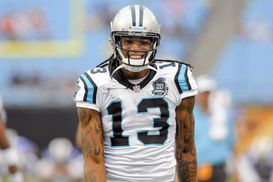 Benjamin has found the end zone in three of his first four NFL games.

Kelvin Benjamin, WR, Carolina Panthers (vs. Chicago): “Raw, needs polish, will have trouble adapting at the professional level.” Those were just a few of the criticisms lofted at Benjamin as he departed the defending champion Florida State Seminoles for the NFL this past winter. Well, four weeks into his first pro campaign and the 6-5, 240-pound freak is making everybody eat their words with a season stat line that consists of 21 receptions for 329 yards and three scores on 36 targets. As quarterback Cam Newton’s primary weapon, Benjamin has become a fantasy must-start no matter what the matchup. But the good news here is that Week 5 offers a favorable home showdown against a Chicago Bears team that currently ranks 20th in the NFL against the pass (250.2 yds/gm) while permitting an average of 26.2 fantasy points per game to opposing wideouts this season (seventh-most in NFL).

Bishop Sankey, RB, Tennessee Titans (vs. Cleveland): This is a roll of the dice specifically recommended for daily fantasy players, but seasonal guys should consider the rookie from Washington a flex option with upside for Week 5. Sankey is fresh off a two-game stretch that consisted of 118 total yards and a touchdown on 18 touches and Titans head coach Ken Whisenhunt said earlier this week that his dual-threat running back is headed for a bigger portion of the workload. That news couldn’t come at a better time for fantasy owners as Sankey and the Titans play host to a Cleveland Browns defense in Week 5 that currently ranks 29th in the NFL against the run (153.7 yds/gm) while surrendering an average of 29.5 fantasy points per game to opposing running backs (second-most in NFL).

Vincent Jackson, WR, Tampa Bay Buccaneers (at New Orleans): He’s averaging a healthy 8.75 targets per game in 2014 and has found the end zone in back-to-back contests, but the real reason we like V-Jax in Week 5 is because of his date with a New Orleans Saints secondary that has been slashed and gashed at will over the first month of the season. Rob Ryan’s crew is in shambles at the moment, ranking 28th in the league both against the pass (272.5 yds/gm) and in scoring (27.5 pts/gm) while surrendering an average of 26.4 fantasy points per game to opposing wide receivers (fifth-most in NFL). Take note that with rookie wide receiver Mike Evans sidelined due to injury, Jackson should be in line for even more targets on Sunday.

Heath Miller, TE, Pittsburgh Steelers (at Jacksonville): Should have no trouble building upon last week’s 10-85-1 (11 targets) stat line against a Jaguars defense that is currently giving up an average of 14.1 fantasy points per game to opposing tight ends this season (third-most in NFL). Miller isn’t the best option on the board for Week 5, but he’s a solid play with a favorable matchup for owners who may have gott en drilled by the injury bug that hit the TE position a couple of weeks ago.

San Diego Chargers, D/ST (vs. New York Jets): By himself, Jets quarterback Geno Smith has already turned the ball over seven times this season, with at least one turnover coming in each of New York’s first four outings. That’s what we here at the National Football Post like to call “consistent.” However, when Smith isn’t fumbling and intercepting the rock to the opposition, he’s busy quarterbacking a Jets offense that currently ranks 25th in the league in scoring (19.8 pts/gm) while permitting an average of 10.0 fantasy points per game to opposing D/STs in 2014 (fifth-most in NFL). Believe it or not, the San Diego D/ST is currently owned in just 58 percent of Yahoo! fantasy leagues, so those of you in a pinch at the position should head to the wire immediately.

Tony Romo, QB, Dallas Cowboys (vs. Houston): Behind a revamped offensive line that has afforded Dallas the luxury of employing a run-heavy attack, Romo is no longer the gunslinger we remember from previous seasons, as evidenced by the fact that the 34-year-old signal-caller currently ranks 25th in the NFL in passing attempts per game (29.5). Ride another option with a more favorable Week 5 matchup, as the Texans are permitting an average of just 17.7 fantasy points per game to opposing quarterbacks this season (sixth-fewest in NFL).

Alfred Morris, RB, Washington Redskins (vs. Seattle): Morris has yet to crack the 100-yard barrier in 2014 and we don’t see that happening on Monday night against a stout and well-rested Seattle defense that ranks fifth in the NFL against the run (72.3 yds/gm) while surrendering an average of just 11.7 fantasy points per game to opposing running backs (fifth-fewest in NFL). Take note that through 12 quarters this season, the Seahawks have given up just one rushing touchdown (Week 1 vs. Green Bay). 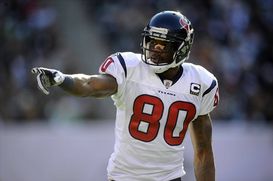 Andre Johnson, WR, Houston Texans (at Dallas): Perhaps this is the weekend Johnson goes nuclear against a Dallas secondary that was supposed to be utter garbage in 2014. But fantasy owners should take note of two key statistics: First, Johnson has topped 75 receiving yards in a game just once since Ryan Fitzpatrick took over at quarterback in Houston. Second, Johnson is currently riding an 11-game scoreless streak that dates back to November 10 of 2013. This isn’t a terrible Week 5 option, but don’t get hung up on name value.

Donald Brown, RB, San Diego Chargers (vs. NY Jets): Brown was supposed to blow up last Sunday against the porous Jacksonville defense, but finished the afternoon with only 54 total yards and no scores on 14 touches. Despite the increased workload, we don’t expect a reversal of fortune Sunday against a Jets front-seven that is permitting fewer fantasy points to opposing running backs than any other team in the league (7.7 pts/gm). Take a pass here and opt instead for a value play like New Orleans’ Khiry Robinson.

Larry Fitzgerald, WR, Arizona Cardinals (at Denver): Fantasy owners want nothing more than to believe that Bruce Arians and the Cardinals spent the bye week looking for ways to get Fitzgerald more involved in the offense, as the future Hall of Famer has notched just ten receptions for 107 yards with no scores on 21 targets through three games this season. But the reality of the situation is that Michael Floyd is now the No. 1 receiver on the Arizona depth chart and when you factor that in with a Week 5 date at altitude against a rested Denver Broncos defense, there’s little chance Fitzgerald busts out of his slump on Sunday. Also note that it looks like Drew Stanton will get the start at quarterback for the Cardinals in Week 5.

Travis Kelce, TE, Kansas City Chiefs (at San Francisco): Yes, Kelce is all the rage following his 8-93-1 (9 targets) bust-out performance against the New England Patriots on Monday night football. But a primetime game at Arrowhead Stadium is a much different situation than a road date at San Francisco to face a 49ers defense that is currently surrendering an average of just 4.7 fantasy points per game to opposing tight ends this season (second-fewest in NFL). If you plan on riding the hot hand here, do so while exercising caution.

Carolina Panthers, D/ST (vs. Chicago): This is not the same lockdown unit we saw in 2013, as the Panthers have been torched for a staggering 75 points and 664 yards of offense in back-to-back losses to the Steelers (Week 3) and Ravens (Week 4). To make matters worse, the Panthers haven’t forced a turnover since Week 2 and play host to a Chicago offense on Sunday that features the dynamic 1-2 wide receiver punch of Brandon Marshall and Alshon Jeffery. Even if Carolina finds a way to limit Marshall and Jeffery, the team still needs to account for fast riser Martellus Bennett and Pro Bowl running back Matt Forte. That’s a tall order.