The Sunday GameDay fantasy live chat returns to its normal time this weekend, commencing at 10:30am eastern and running for one full hour. Topics will include starts and sits, injury updates, weather reports, point spread picks, survivor selections and more. To access the chat, simply hit up the homepage of the NFP and look to the “Hot News & Rumors” section.

If you can’t make the chat, feel free to contact me on twitter @JoeFortenbaugh, as I’ll be checking in periodically between now and kickoff.

Why: Great spot for the Saints, who are 5-0 against the spread over their last five games coming off the bye week, while Buffalo is on the second leg of back-to-back road trips that started with a divisional rival and ends with a non-conference opponent. Keep an eye on tight end Jimmy Graham’s status for this one, but we’re confident that New Orleans is the way to go.

Analysis: The 2-4 Falcons boast home wins over the 3-4 St. Louis Rams and 0-7 Tampa Bay Buccaneers. That’s not exactly what we would call elite competition. Further, Atlanta is 0-2 both SU and ATS on the road this season, is 2-7 ATS over their last nine games overall and is 1-4-1 ATS over their last six road games. Arizona enters Week 8 on extra rest having played the Thursday night game in Week 7 and is 2-1 both SU and ATS at home this season.

Robert Griffin III, QB, Washington Redskins (at Denver): Griffin currently ranks 13th in fantasy scoring at the quarterback position, but this is the week the second-year signal-caller busts out. Vegas has the total for this game posted at 58.5 and the Broncos currently rank dead last in the NFL in passing defense (319.9 yds/gm), 27th in scoring defense (28.1 pts/gm) and are surrendering more fantasy points to opposing quarterbacks than any other team in the league (25.4 pts/gm). Add in some points via the ground game and RG3 will emerge from Sunday with his best week yet.

Eddie Lacy, RB, Green Bay Packers (at Minnesota): The rookie from Alabama is averaging 22.6 carries per game since returning to action after suffering an early season concussion. And while the Vikings may rank a semi-respectable 14th in the league against the run (102.3 yds/gm), this defense has already surrendered eight touchdowns to opposing running backs on the year, which has contributed to an average of 23.1 fantasy points per game given up to the RB position in 2013 (second-most in NFL).

If there was ever a week for RG3 to bust loose, Week 8 is it.

Rueben Randle, WR, New York Giants (at Philadelphia): Caught six passes for 96 yards and two scores against Philly back in Week 5 and in the two games since, Randle has amassed another six receptions for 115 yards and two scores. This guy has surpassed Hakeem Nicks in terms of reliability and is staring down the barrel of a very favorable Week 8 matchup against a Philadelphia defense that has given up more fantasy points to the wide receiver position this season than any other organization in the business (34.7 pts/gm).

Stevan Ridley, RB, New England Patriots (vs. Miami): Remember this guy? An early season candidate for the end of the year bust list, Ridley has found the end zone three times over his last two outings while racking up a total of 34 touches. Ride him with confidence in Week 8 against a Miami defense that has surrendered more fantasy points to opposing running backs this season than any other team in the league (23.2 pts/gm).

Marques Colston, WR, New Orleans Saints (vs. Buffalo): Is riding a five-game scoreless streak that includes just three receptions for 26 yards over his last two outings, but this is the weekend Colston wakes up and delivers for fantasy owners. Buffalo is on the second leg of back-to-back road trips that opened with a divisional showdown at Miami and ends with a non-conference matchup inside a dome, so the spot here favors New Orleans big time. In addition, the Bills currently rank 21st in the NFL in pass defense (256.9 yds/gm) while surrendering an average of 33.1 fantasy points per game to opposing wide receivers this season (second-most in NFL).

Tony Gonzalez, TE, Atlanta Falcons (at Arizona): Was targeted a staggering 28 times in just two games before getting shut down for only two receptions totaling 30 yards last Sunday against Tampa Bay. The good news for owners is that Week 8 offers Gonzalez another favorable spot against an Arizona defense that is giving up more fantasy points to opposing tight ends this season than any other team in the league (17.0 pts/gm). With Cardinal CBs shutting down Harry Douglas and company, look for Tony G to emerge as quarterback Matt Ryan’s most targeted weapon.

Philadelphia Eagles, D/ST (vs. NY Giants): Recommended only for those of you in a pinch due to the multiple teams on a bye in Week 8, Philly’s matchup is one of the best of the board, as the Giants are giving up an average of 14.6 fantasy points per game to opposing D/STs this season (t-second-most in NFL). Sure, New York found a way to beat Minnesota last Monday night, but this team still leads the league by a wide margin in turnovers committed (24).

Andy Dalton, QB, Cincinnati Bengals (vs. NY Jets): The Red Rifle has caught fire over the last two weeks, throwing for 709 yards and six touchdowns with only one interception in back-to-back road games. So while owners may be enticed to request Dalton’s services now that Cincinnati has returned home, we offer stern warning: The Jets currently rank tenth in the league against the pass (224.9 yds/gm) and are surrendering an average of just 18.4 fantasy points per game to opposing quarterbacks this season (tenth-fewest in NFL). This defense is far different from what Buffalo and Detroit trotted out against Dalton ov er the last two weeks.

Steven Jackson & Jacquizz Rodgers, RBs, Atlanta Falcons (at Arizona): No matter who gets the start, we advise you pass on both. Arizona currently ranks seventh in the league against the run (97.0 yds/gm) while giving up an average of just 14.4 fantasy points per game to opposing running backs this season (eighth-fewest in NFL). In addition, take note that in three home games this season, the Cardinals are permitting an average of just 3.8 yards per carry with one rushing touchdown allowed. 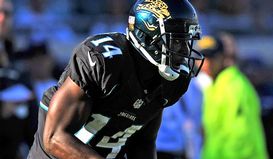 Blackmon has been good to fantasy owners this season, but Week 8 against San Fran is a pass for us.

Justin Blackmon, WR, Jacksonville Jaguars (vs. San Francisco, in London): Blackmon erupted for 19 receptions for 326 yards and a score over his first two games of the season, but was held in check but the suspect Chargers last Sunday (6-58-0). Expect more of the same this Sunday in London against a 49ers defense that has surrendered an average of only 12.75 points per game during the team’s four-game winning streak. Also of note, San Francisco is permitting an average of just 18.9 fantasy points per game to opposing wide receivers this season (tenth-fewest in NFL).

Chris Ivory & Bilal Powell, RBs, New York Jets (at Cincinnati): Not only will they likely cut into each other’s totals, but Ivory and Powell run into a Cincinnati defense on Sunday that currently ranks eighth in the league against the run (97.9 yds/gm), seventh in scoring (19.3 pts/gm) and is surrendering an average of just 14.7 fantasy points per game to opposing running backs this season (ninth-fewest in NFL). Vegas has this game totaled at 39 points for a reason.

All St. Louis Rams wide receivers (vs. Seattle): Kellen Clemens is starting at quarterback for the Rams and the Seattle defense is surrendering an average of just 16.8 fantasy points per game to opposing wideouts this season (seventh-fewest in NFL). Nothing about this situation looks even remotely appealing.

Jordan Cameron, TE, Cleveland Browns (at Kansas City): With a 45-515-6 stat line through seven games, Cameron has without question been one of the league’s most impressive tight ends this season. But Sunday in Kansas City offers a variety of pitfalls, beginning with the fact that journeyman signal-caller Jason Campbell will be lining up under center for Cleveland. Further complicating the issue for Cameron is the fact that Kansas City has given up fewer fantasy points to opposing tight ends this season than any other team in the league (2.9 pts/gm). You’ve been warned.

Cleveland Browns, D/ST (at Kansas City): A much-improved unit based upon what we’ve seen in previous seasons, the Browns have plummeted almost as quickly as they rose up the ranks early in the year. Cleveland surrendered an average of just 17.5 points per game through their first four contests of the season, but the Browns have watched that number skyrocket to 28.6 points per game over the last three weeks. The Chiefs are giving up an average of just 7.4 fantasy points per game to opposing D/STs this season (seventh-fewest in NFL) and have committed only eight turnovers on the season (t-fifth-fewest in NFL). This isn’t the worst play on the board, but many of you can do better.