Analysis: Losers of six of their last eight, the Falcons and game management nightmare Mike Smith have dropped three straight home contests and are the proud owners of the NFL’s worst defense. Playing behind one of the league’s most porous offensive lines, quarterback Matt Ryan has already been sacked 23 times this season (12th-most in NFL) and will be under heavy duress Sunday against an Arizona defense that is in a great bounce-back spot following last week’s 19-3 loss at Seattle. Yes, Arizona is traveling to the east coast for this one, but be advised that this game will start at 4:05pm eastern, which helps to combat the time zone difference. In addition, note that Arizona is 7-2 ATS over its last nine road games while Atlanta is 2-6 ATS over its last eight contests overall.

Stop traffic, but the Big Puma and I have a finalized card to share with you guys this week:

Ryan Tannehill, QB, Miami Dolphins (at NY Jets): Tannehill’s in the midst of the finest season of his three-year professional career, with a 66.1 percent completion percentage and 93.4 QB rating through 11 starts. In addition, the Texas A&M product has tossed two or more touchdown passes in three of his last four starts and has completed over 70.0 percent of his attempts in each of his last four outings. Not only is Tannehill running hot at the moment, but the Miami signal-caller has the luxury of a Week 13 date with a disintegrating New York Jets squad that is currently surrendering an average of 23.3 fantasy points per game to opposing quarterbacks this season (second-most in NFL). We love Miami to roll in this spot.

Denard Robinson, RB, Jacksonville Jaguars (vs. NY Giants): Over his last five starts, Robinson is averaging a healthy 19.0 touches per game with four trips to the end zone. But few outside the fantasy world have noticed the former Michigan quarterback’s rise to the top of the Jaguars’ depth chart at the running back position. However, savvy owners quick enough to land Robinson off waivers have been handsomely rewarded for their foresight and will once again reap a solid return on their investment Sunday when Shoelace and the Jaguars take on a New York Giants defense that currently ranks 31st in the NFL against the run (142.6 yds/gm) while permitting an average of 23.3 fantasy points per game to opposing running backs this season (third-most in NFL). 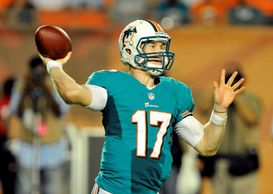 US PRESSWIREA date with the New York Jets gives Tannehill one of the best matchups on the board for Week 13.

Michael Floyd & John Brown, WRs, Arizona Cardinals (at Atlanta): Coming off a disappointing 19-3 loss at Seattle last Sunday, you know we’re going to get a quality effort from Bruce Arians and the Arizona Cardinals in Week 13. The good news here for the Arizona offense and, specifically, wide receivers Michael Floyd and John Brown, is that the Falcons and their shoddy secondary currently rank dead last in the NFL against the pass (284.1 yds/gm) while surrendering an average of 26.1 fantasy points per game to opposing wide receivers this season (fourth-most in NFL). Those of you who play in deep daily fantasy league tournaments should also keep a close eye on quarterback Drew Stanton.

Tre Mason, RB, St. Louis Rams (vs. Oakland): While the Auburn product has only found the end zone once this season, Mason is averaging a dependable 19.0 rushing attempts per game over his last four starts, one of which resulted in an impressive 113-yard effort against defending AFC Champion Denver. The upside here is relatively limited, but those looking for a good flex play in Week 13 should seriously consider starting Mason, as the Oakland Raiders currently rank 25th in the NFL against the run (126.7 yds/gm) while giving up an average of 22.9 fantasy points per game to opposing running backs this season (fourth-most in NFL).

Martavis Bryant, WR, Pittsburgh Steelers (vs. New Orleans): The rookie from Clemson has found the end zone six times through five games this season and is averaging a staggering 20.1 yards per reception on the year. This kid is a home run hitter who should take at least one big play to the house Sunday against a banged up New Orleans defense that currently ranks 23rd in the league against the pass (253.3 yds/gm) while permitting an average of 25.7 fantasy points per game to opposing wide receivers this season (eighth-most in NFL). If the Saints could lose three straight games at home, imagine how an outdoor road trip against a non-conference opponent will play out.

Charles Clay, TE, Miami Dolphins (at NY Jets): The fourth-year tight end is currently battling both knee and hamstring injuries, but the word out of Miami is that Clay should be able to go Monday night in New York. That’s good news for fantasy owners in need of help at the tight end position, as no team in the National Football League is giving up more fantasy points to opposing tight ends this season than the Jets (11.5 pts/gm).

Miami Dolphins, D/ST (at NY Jets): All you need to know here is that the Jets have quit on the season and are turning the keys to the car back over to turnover-prone quarterback Geno Smith.

Philip Rivers, QB, San Diego Chargers (at Baltimore): The San Diego signal-caller got off to a fast start this season, but be advised that Rivers is currently playing with a rib injury and has tossed just two touchdown passes over his last three starts, with four interceptions. Even though the Baltimore defense has been susceptible to the passing game this year, this is a bad sp ot for the Bolts, who are traveling across the country for a 1:00pm eastern start time. The upside here is minimal, so we advise fantasy owners to look for another quarterback option with a more favorable matchup.

Isaiah Crowell & Terrance West, RBs, Cleveland Browns (at Buffalo): The rookie duo went off last Sunday in Atlanta, but Week 13 offers up a much more daunting challenge than what the Falcons threw on the field in Week 12. Not only will Crowell and West cut into each other’s touches, but take note that the Buffalo Bills currently rank eighth in the NFL against the run (98.4 yds/gm) and are surrendering an average of just 13.7 fantasy points per game to opposing running backs this season (third-fewest in NFL). In addition, be advised that the Bills are giving up an average of just 17.5 points per game in home contests this year.

Vincent Jackson, WR, Tampa Bay Buccaneers (vs. Cincinnati): Jackson has clearly taken a backseat to rookie wideout Mike Evans, as evidenced by the fact that the veteran pass-catcher hasn’t found the end zone since September 28. Look for that streak to continue Sunday against a Bengals defense that is currently surrendering an average of just 16.9 fantasy points per game to opposing wide receivers this season (second-fewest in NFL). 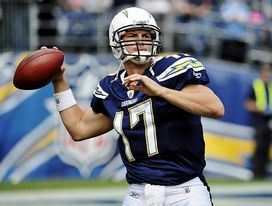 Ryan Mathews, RB, San Diego Chargers (at Baltimore): If we don’t like Rivers, we sure as hell don’t want to start Mathews in Week 13 at Baltimore against a Ravens defense that currently ranks sixth in the NFL against the run (88.3 yds/gm) while giving up fewer fantasy points to opposing running backs than any other team in the business (12.8 pts/gm). Even though Mathews went off for 105 yards and a score last Sunday against St. Louis, the San Diego running back has failed to eclipse 70 rushing yards in three of four starts this season.

Eric Decker & Percy Harvin, WRs, New York Jets (vs. Miami): The Dolphins currently rank fourth in the NFL against the pass (211.7 yds/gm), but the real reason we’re fading both Decker and Harvin in Week 13 is the fact that not only has this Jets team quit on the season, but Geno Smith has been re-inserted into the starting lineup at the quarterback position. Yes, that’s the same Geno Smith who has thrown just seven touchdown passes in 245 attempts this season with ten interceptions and a dismal QB rating of 67.4.

Jordan Cameron, TE, Cleveland Browns (at Buffalo): Cameron isn’t a 100 percent lock to play this weekend (concussion), but even if he does, take note that the Buffalo Bills are permitting an average of just 5.3 fantasy points per game to the tight end position this season (fourth-fewest in NFL). The upside here is minimal.